What is Flash Crash?

Flash Crash simply means the sell-off of a stock, a currency pair that makes the price drop hundreds of pips in a very short time. Flash Crash takes place so fast and so hard that if a trader is trading at the right time it will just open his mouth, stare at the screen or immediately ask Google to see what the hell is going on? ??

Human error: The US Securities and Exchange Commission (SEC) considers humans to be the cause of periodic incidents in the stock market as well as other markets. If a trader or fund managers execute orders with a large block on an instant execution mechanism in the market, it is considered the culprit leading to the Flash Crash issue.

Computer / software problem: Differences in data originating from markets or exchanges are also considered as the reason for inaccurate price data related to flash issues. In addition, errors in the programming code of automated trading systems have unintended negative consequences.

Cheat: A so-called "rogue" act involving placing large sell orders in the market is canceled only when the price is approaching. The Commodity and Futures Trading Commission of America (CFTC) considers this method to be the cause of a 2010 Flash Crash of the S&P 500 only.

High-frequency trading (HFT): HFT is a controversial trading method in which the system is automatically controlled by the algorithms used to recognize changing market conditions in order to execute appropriate trades. HFT systems can place a large amount of orders on the market at a very fast rate thus causing a negative move in pricing. Although the role of HFT companies is still controversial, central banks such as Bundesbank, Germany believe that it is HFT companies that increase the risk of Flash Crash.

The NYSE Flash Crash led to a sudden collapse in the US stock market on May 6, 2010, causing the Dow Jones to drop 1000 points in just 10 minutes before rebounding. Meanwhile a lot of stocks on the New York Stock Exchange (NYSE) fell to 1 USD or lower. By the end of the day, the Dow Jones had recovered quite quickly to 70%. This has caused gold to record highs of up to 1,200 USD / Oz.

According to a police investigation, Navinder Sarao, an Englishman, was the culprit leading to the sell-off situation. Investigators discovered that Sarao had previously made and canceled hundreds of "E-mini S&P" futures. He was involved in an illegal trading tactic, as a result, Waddell & Reed was forced to break a $ 4.1 billion contract.

CME Group warned Sarao and his broker, MF Global, that Sarao's transactions were allegedly deceptive to manipulate market prices by setting the wrong prices, then quickly selling them to make a profit. .

At that time, everyone thought that the accident was due to the Greek debt crisis. If the ECB lets Greece default, it could trigger the default of other debtors such as Portugal, Ireland and Spain. Bond holders of these countries will suffer huge losses. Because investors are mainly banks, similar to what happened during the 2007 banking credit crisis. Cause fear of credit freezing in European banks. However, the reality is made by one hand Sarao. 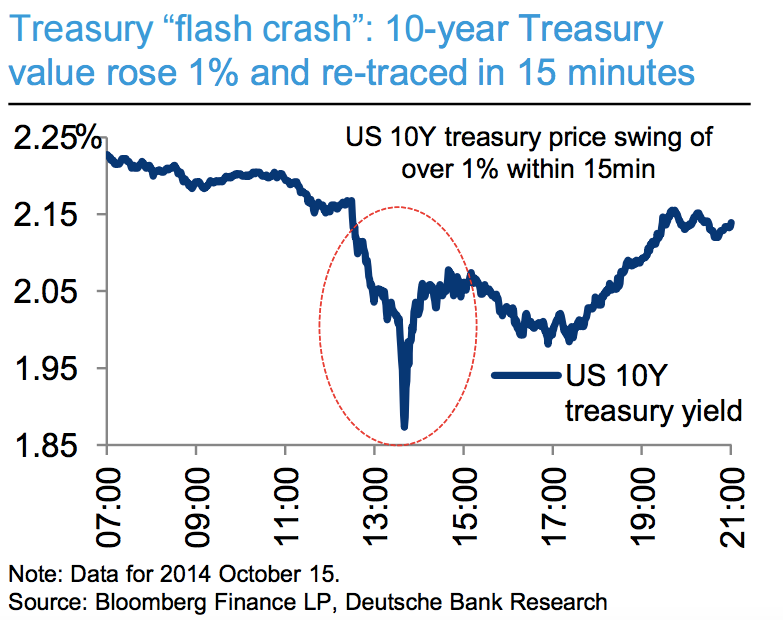 On October 15, 2014, the 10-year Treasury yield fell from 2.0% to 1,873% in a few minutes and then quickly increased again. It is the largest decline since 2009. Many people blame algorithmic programs, as 60% of transactions are made via electronic systems, rather than via traditional phones. That makes the computer system almost not enough to react to the large blocks of transactions leading to Flash Crash.

NASDAQ is famous for Flash Crash. On August 22, 2013, NASDAQ was closed from 12:14 pm EDT to 3:25 pm EDT. One of the servers at NYSE cannot communicate with NASDAQ server to provide stock price data. Despite many efforts, the issue could not be resolved and the server at NASDAQ was shut down.

It was this NASDAQ bug that cost up to $ 500 million, when Facebook's first IPO was announced. On May 18, 2012, the IPO was delayed for 30 minutes. In other words, a trader cannot place, change or cancel an order. After the problem was fixed, 460 million shares were successfully traded.

But if Flash Crash lasts long enough it will cause anxiety, creating that loss of confidence. Especially when it comes to business cycles it can also cause economic recession.