Samsung has two main flagship lineups – Galaxy S and Galaxy Note, at the same time, there’s a Galaxy Z lineup available, which represents foldable smartphones. All of these series have their own identities as the Galaxy S is a camera focussed lineup, while the Galaxy Note includes phones with S Pen support.

While the Galaxy S22 series is likely to launch in February next year, leaks and rumors are continuously appearing online. Thereby, we are maintaining a track of every single piece of information regarding the Galaxy S22, Galaxy S22+, and Galaxy S22 Ultra.

Aside from this, it is important to mention that the 108MP is covered by the Super Clear Glass AKA Gorilla Glass DX that is also debuted with Galaxy Z Fold 3 and Z Flip 3. 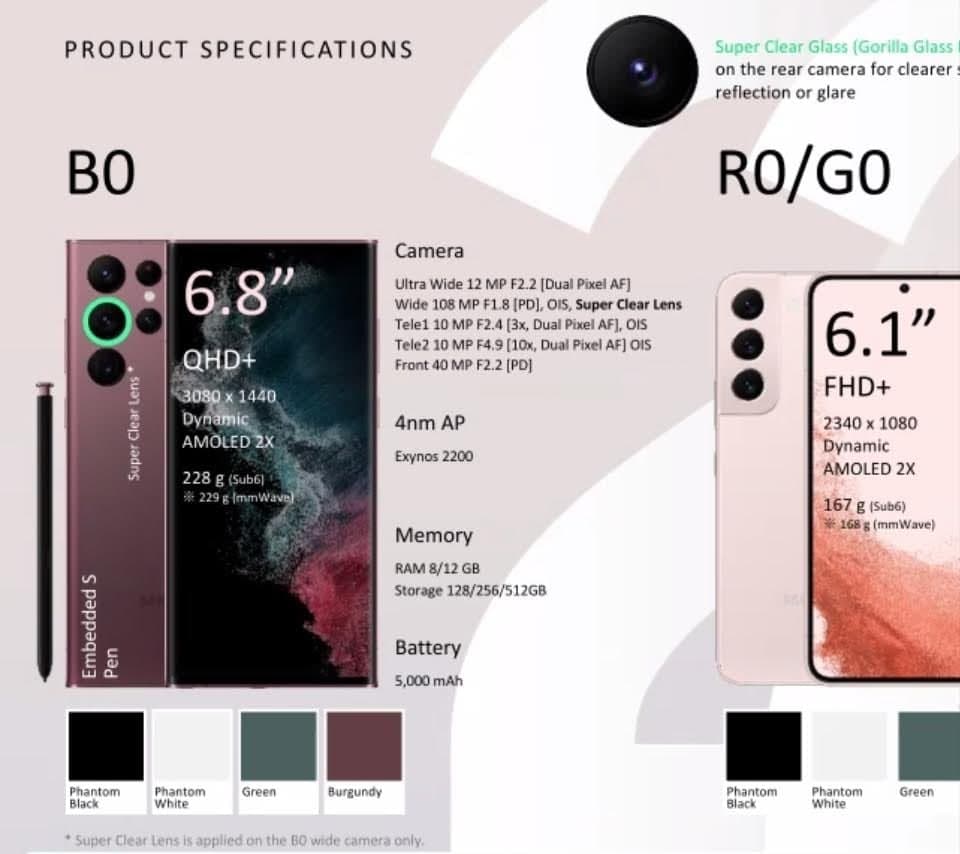 Tipster IceUniverse disclosed the base variant of the Galaxy S22 Ultra will have 8GB RAM, while the high-end variants will boast up to 12GB and 16GB of RAM.

On the other hand, the Galaxy S22 Ultra will highlight Burgundy, Green, Phantom Black, and Phantom White color shades. 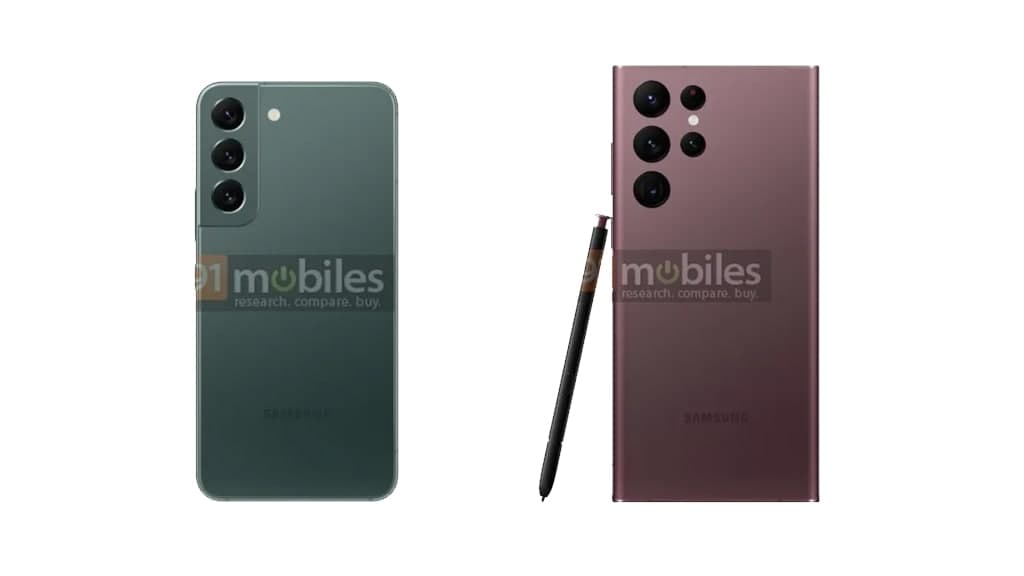 Well-known tipster Evan Blass reportedly revealed a 3D render of the upcoming Galaxy S22 Ultra in Bronze color shade, however, the Tweet is no longer available. 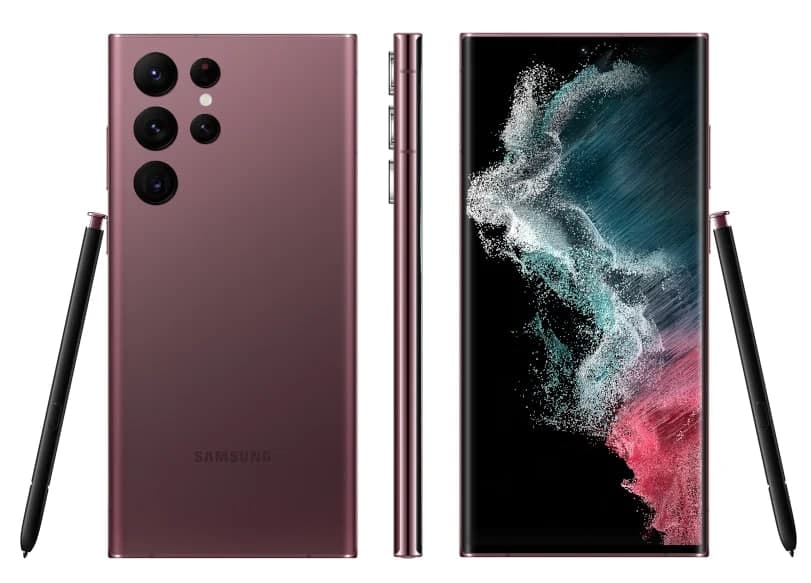 According to a recent report by SamMobile, the Galaxy S22 Ultra could highlight a massive 1TB internal storage variant.

To be noted, the Korean tech giant had also introduced the Galaxy S10+ with 12GB of RAM and 1TB of built-in storage.

IceUniverse revealed that the dummy units of Samsung Galaxy S22, Galaxy S22+, and Galaxy S22 Ultra are now available to purchase on Alibaba.

In addition, the source disclosed that these dummy phones are listed in White and Black colors, at the same time, a total of 6 units cost just $50. 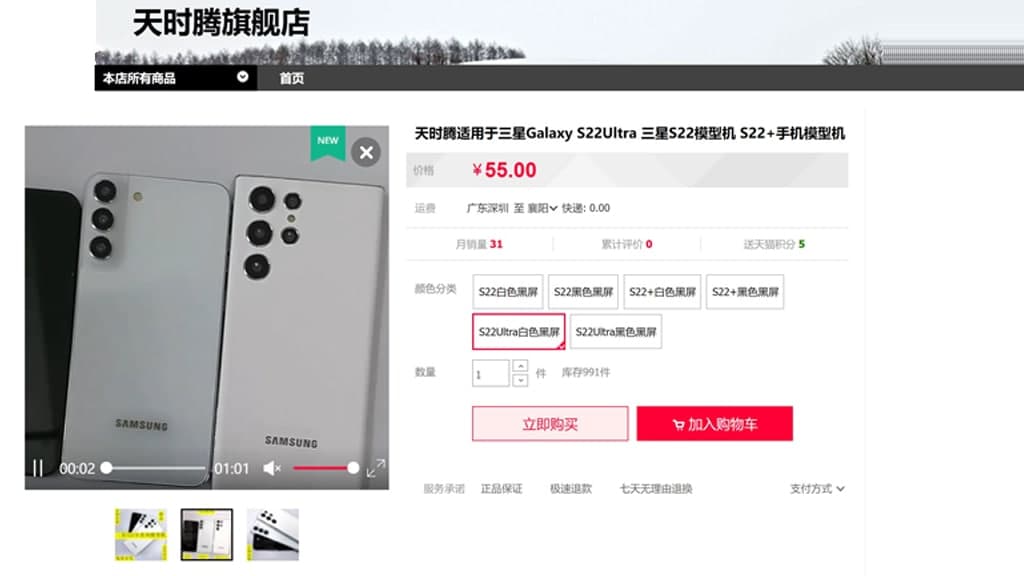 Leaker AhmedQwaider disclosed that the Galaxy S22 Ultra will feature big upgrades in terms of camera department such as Super HDR, Super ISO Pro and more.

Amazing video evolution #GalaxyS22Ultra &professional cinematography “HDR” has been converted to “Super HDR” Colors are more realistic and lighting quality is also improved due to “Super” ISO Pro”
And the video has evolved to 68 billion colors at 12-bit rate😲
editing video easy pic.twitter.com/1wh7Zmnn99

According to the latest leak (via IceUniverse), the Galaxy S22 Ultra features useful AI features in each section of the phone’s camera department.

Talking specifically about the 108MP mode, the source disclosed that the camera page will show an “AI Detail Enhancement” button at the bottom right corner. Read more

Latest rumor spreading from South Korea suggests that Samsung Galaxy S22 series launch may not happen on February 8, at the same time, the shipments may not begin on the 18th as well.

Besides, the upcoming flagship lineup may be delayed by Samsung to late February or early March 2022. It’s not confirmed, but chip shortage is the issue behind the Galaxy S22 series halt. 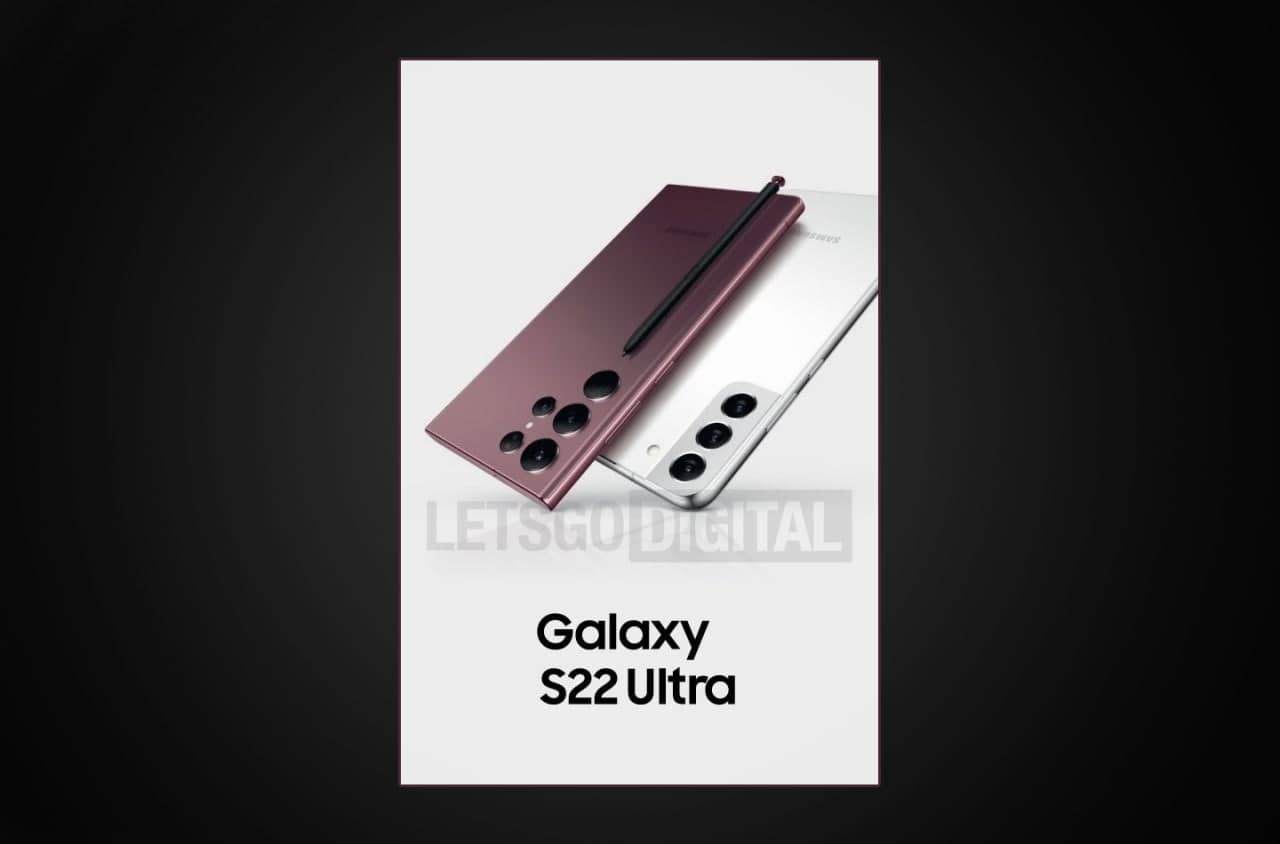 A UK-based smartphone retailer MobileFun divulged the dummy units of the upcoming Galaxy S22, Galaxy S22+ and Galaxy S22 Ultra devices. The images clearly showcase the camera module and S Pen slot on the top variant of the S22 lineup. [Via] 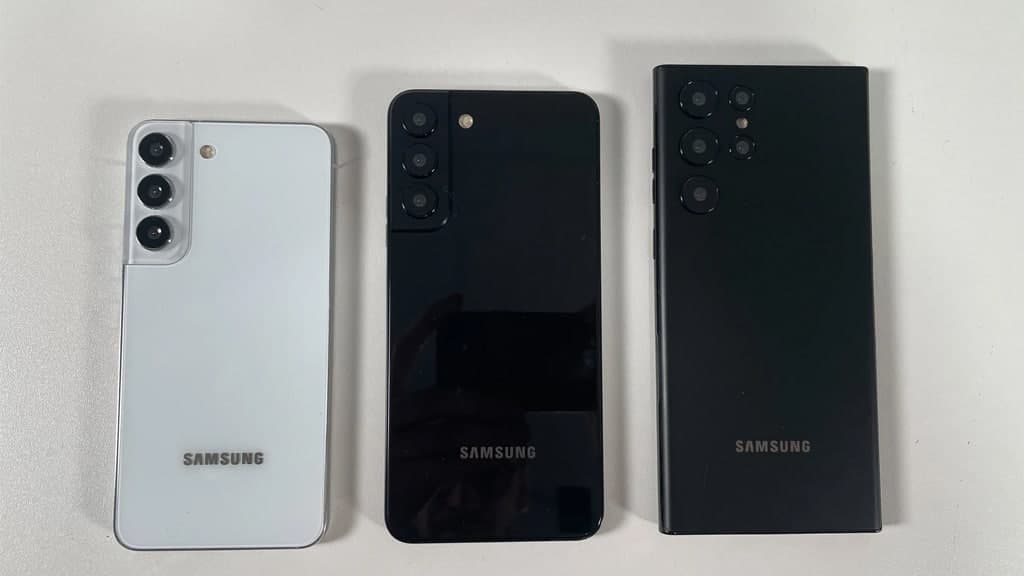 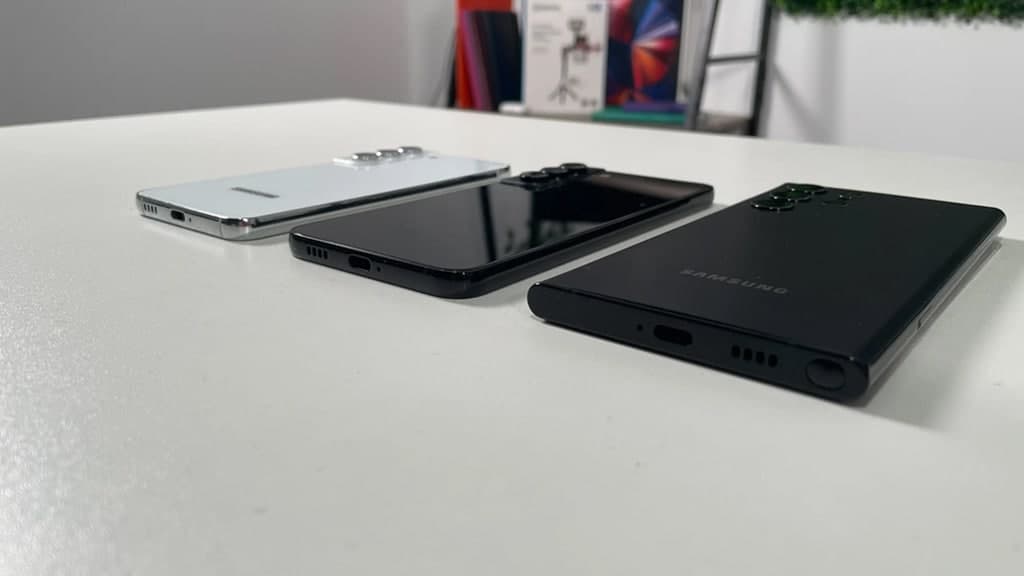 MobileFun has published the complete list of official Galaxy S22 Ultra cases. Also, the retailer has shared some images of how they look like, the names in the listing, as well as the description. Read more 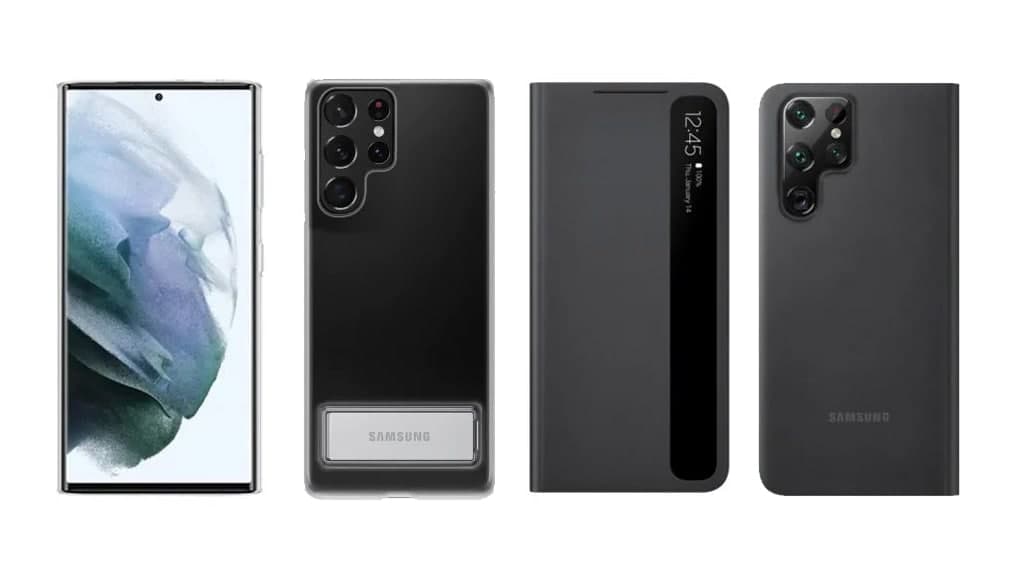 According to GalaxyClub report, the Galaxy S22 standard variant and the Galaxy S22+ will be available in Beige, Black, Green, Grey, Light Blue, Rose Gold, and White colors.

Besides, the Galaxy S22+ will also feature a Violet color shade in addition to the above-mentioned colors, however, the availability may differ for different markets.

On the other hand, the Galaxy S22 Ultra will launch in four color options including Black, Dark Red, Green, and White. Also, some additional colors will also be available through Samsung’s online store.

Tipster IceUniverse claimed that the Galaxy S22, S22+ and S22 Ultra will come with glass back panels, which means Samsung is not compromising with the quality of upcoming flagship phones.

There is a definite answer about the rear cover material of Galaxy S22 series:
S22, S22 +, S22 ultra are all made of glass! 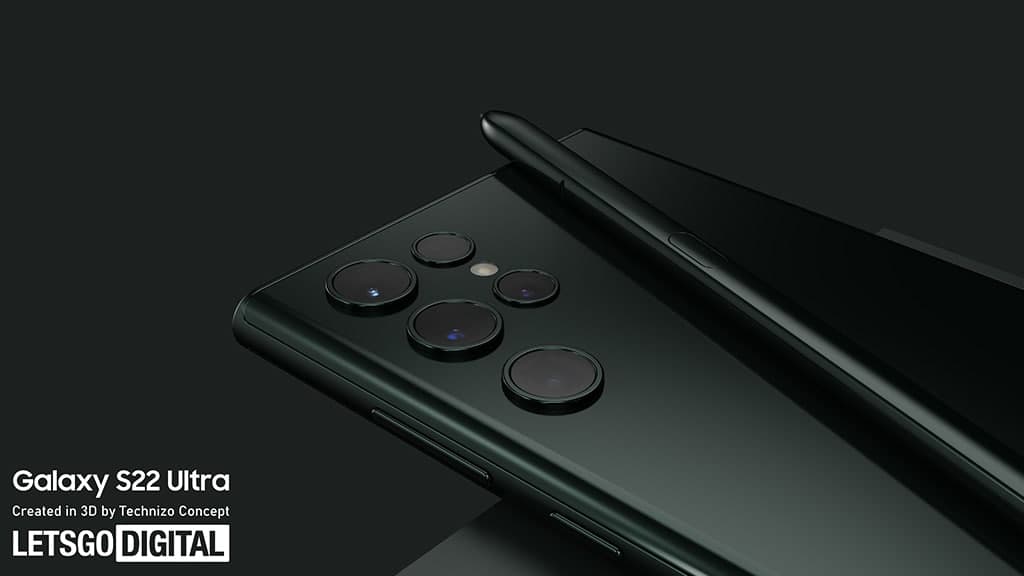 According to ITmaterial report, the Galaxy S22 Ultra will introduce a new camera feature called “Detail enhancer”, as spotted in camera app strings.

Using the software as well as the 108MP camera sensor, the feature could further enhance the detail of captured images and macro shots.

According to well-known Samsung insider IceUniverse, the Galaxy S22 Ultra photo samples are quite stunning. However, the hardware specifications remains the same as the S21 Ultra, the company did major optimization that makes it possible.

Although the hardware specifications look little different from S21 ultra, Samsung’s optimization ability is very strong, and the sample of S22 ultra looks much stronger. 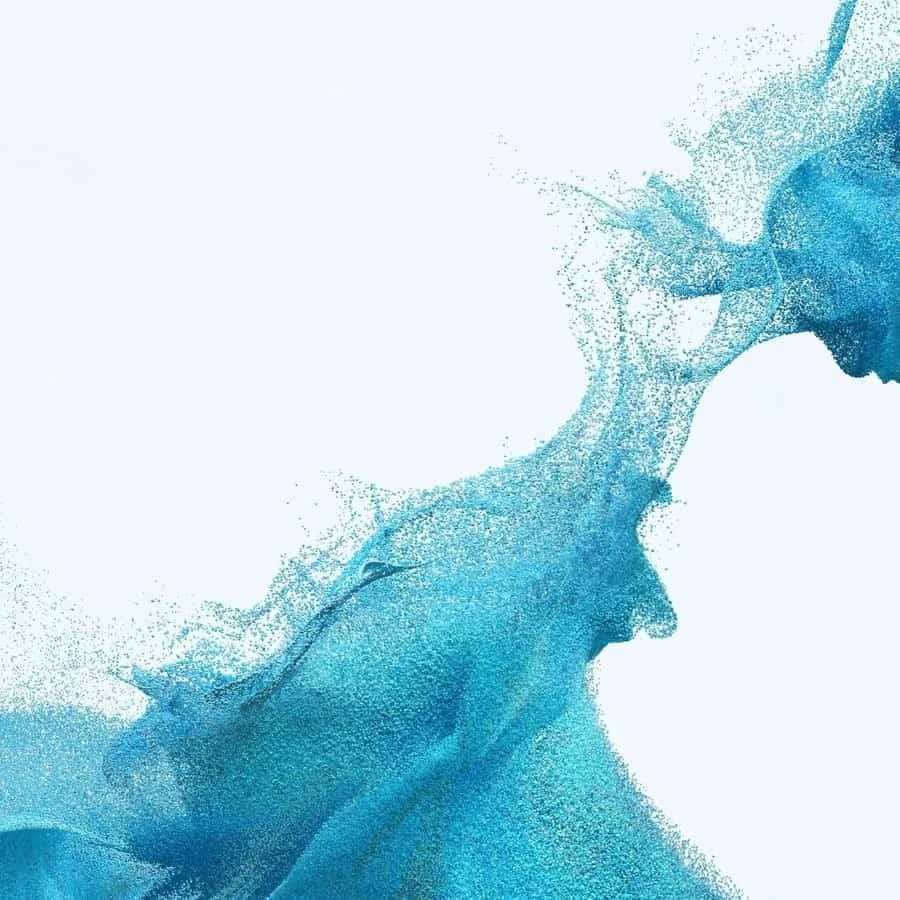 Samsung published a support page for an unreleased smartphone, which bears model number SM-S908U on its Chinese website.

According to tipster Snoopytech, there will be four color variants of the Galaxy S22 and Galaxy S22+, namely Pink Gold, Green, Black, and White.

On the other hand, the Galaxy S22 Ultra is likely to feature Dark Red, Black and White color shades, however, memory configuration could be 12GB and storage to 256/512GB.

While the Galaxy S22 Ultra is rumored to make its official debut as a new Galaxy Note phone with full-fledged S Pen support alongside a dedicated silo, Samsung has reportedly renamed this upcoming flagship.

According to Korean tipster FrontTron, the company has canceled (killed) the Galaxy S22 Ultra, while the top variant of the upcoming flagship lineup will be called Galaxy S22 Note.

As the rumored Galaxy S21 FE and Galaxy S22 series launch timelines are coming closer, Samsung seems to boost its preparations as well. Now, the company has dropped the Galaxy S21 and S21+ prices by INR 5,000 (around $66).

According to a recent report, Samsung could launch the standard Galaxy S22 model with a starting price tag of $799, the same as the Galaxy S21, which was launched in January 2021.

FCC tested the Galaxy S22+ and published the documents on its official website, which confirms some of its key specifications. Check below –

The Galaxy S22 series is expected to be released in February 2022, meanwhile, an alleged S22+ has appeared on Geekbench with model number – SM-S906U. The codename of the motherboard is “taro” which hints at Snapdragon 8 Gen 1 chip under the hood.

According to the leaked Galaxy S22 series camera lens tempered films, the Galaxy S22 Ultra will have a P-shaped camera module, the same as the initially emerged CAD renders. However, the Galaxy S22 and S22+ have a triple rear camera system with their predecessors-like design. 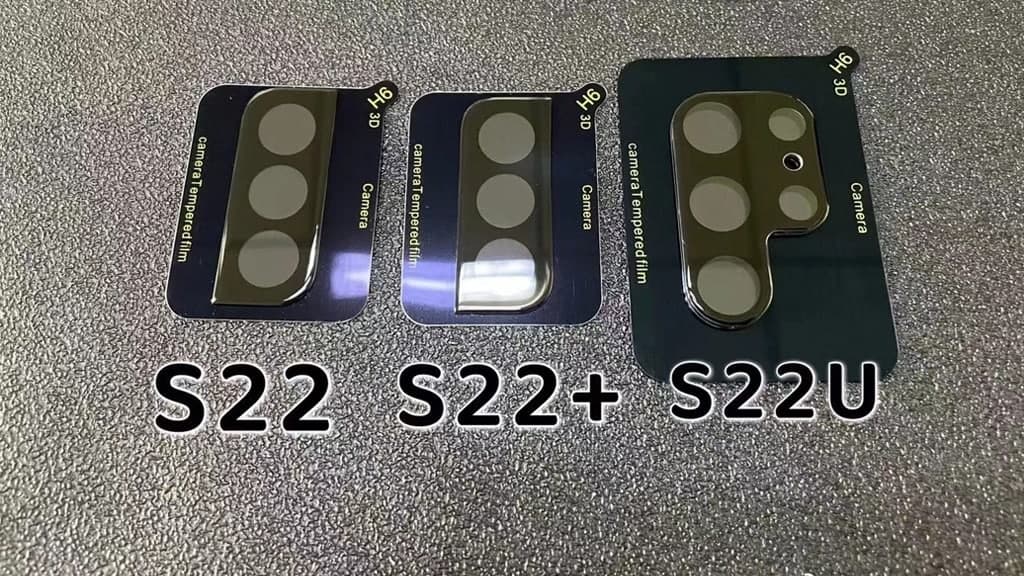 Qualcomm has officially launched its next-generation flagship chipset for mobile phones called Snapdragon 8 Gen 1. The first Qualcomm Snapdragon 8 Gen 1 phone will launch later this year, which will be Xiaomi 12 series.

However, Samsung will also use this new chipset for its upcoming Galaxy S22 series, which is rumored to debut in mid-February. Read more: Qualcomm Snapdragon 8 Gen 1 chip launched to power all 2022 flagships

Tipster Stufflistings spotted the standard Galaxy S21 variant on India’s BIS database with model number SM-S901E/DS and SM-S901B/DS. The ‘E’ suffix at the end of the former model number suggests that the device may be equipped with Snapdragon 8 Gen 1 chipset.

Samsung aims to use Qualcomm chips for Galaxy S22 FE and other smartphones/tablets in 2022. Read more 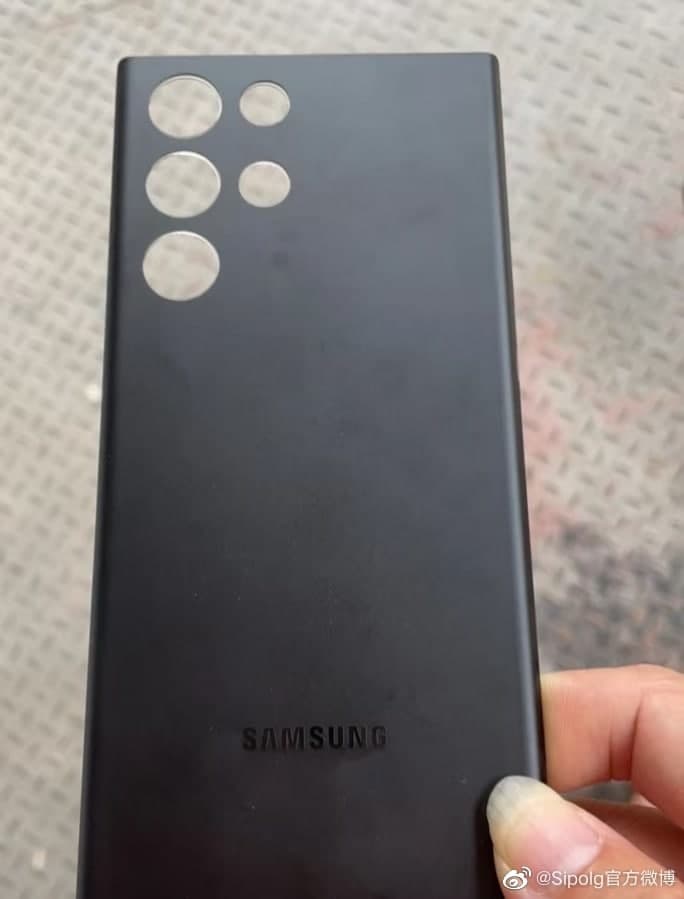 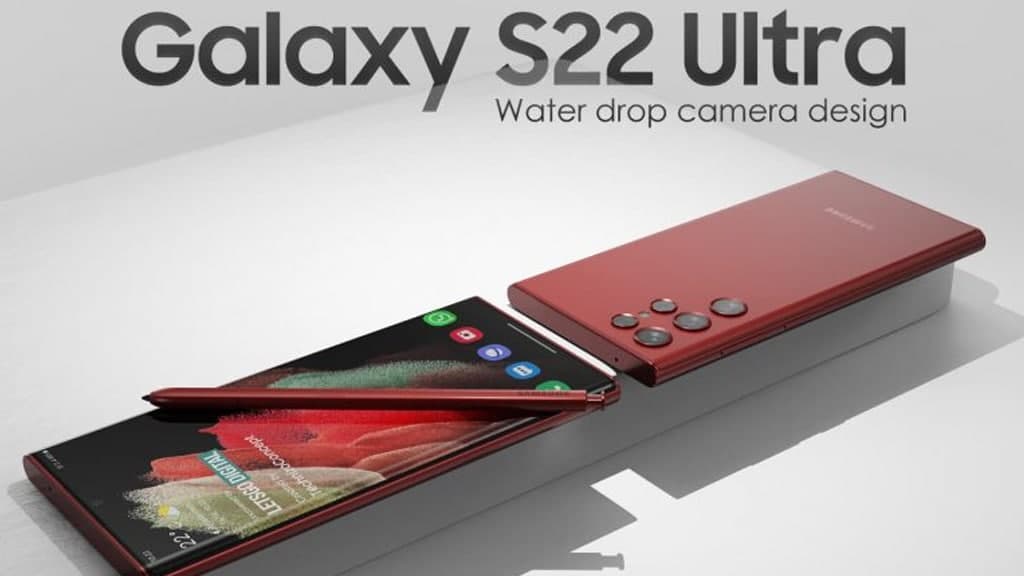 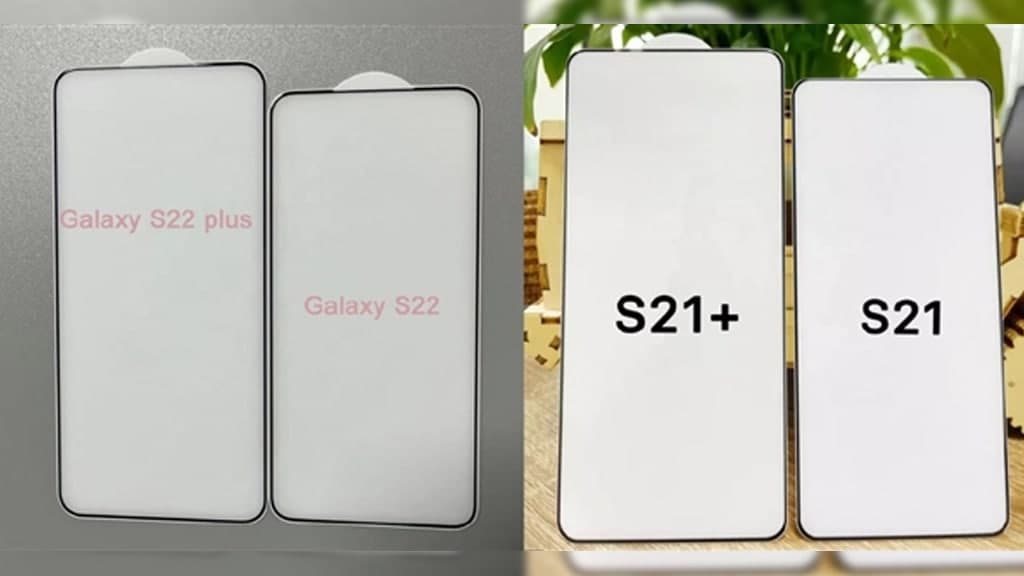 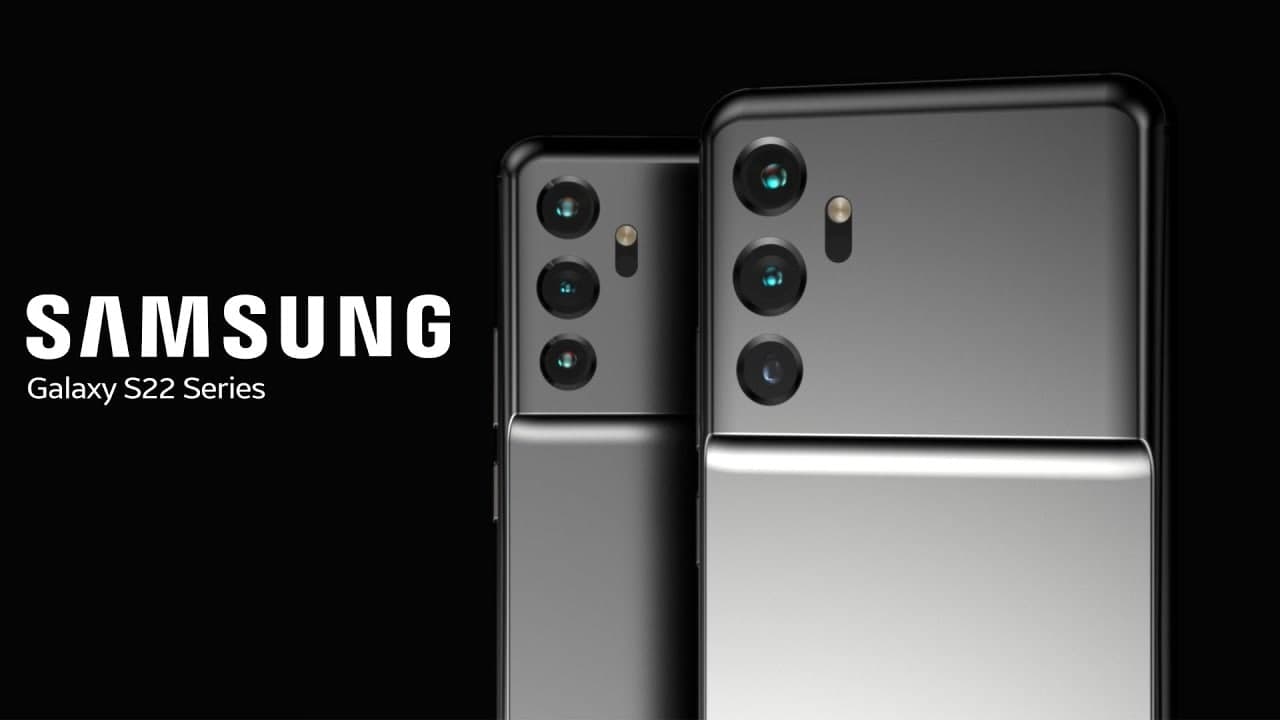 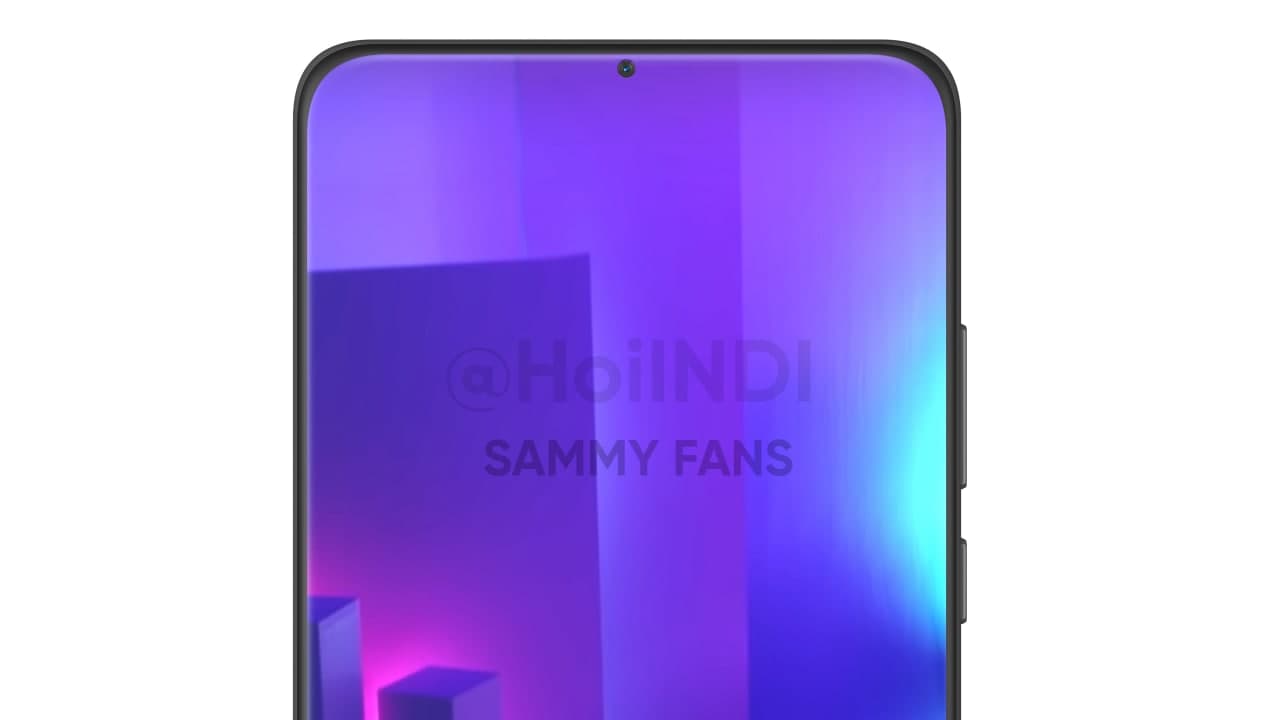 The following rumor IS NOT FIXED, but one of the CONSIDERING OPTIONS.

S22 Ultra will be the ONLY model with a GLASS back.
The base and the plus model will have an improved “reinforced polycarbonate”, aka plastic material.

from my source Hades (7/8 correct) pic.twitter.com/Rfbd4VSdT7

Samsung Galaxy S22 could have the most powerful Snapdragon processor ever made. Source

“SM8450 is Qualcomm’s next-gen premium system-on-chip (SoC). It has an integrated Snapdragon X65 5G Modem-RF system. It is fabricated on a 4nm process.” pic.twitter.com/u1GXMhOWBf

Samsung’s under-display camera (UPC) smartphone is not too away!. Source

STAY CONNECTED WITH US:

Android Auto is a smart driving app created by Google that helps you focus, stay connected, and…

This year, Samsung launched the noteworthy Galaxy S22 series smartphones with most of the latest and advanced…