So far, NEAR Protocol has quietly evolved into a scalable, PoS network. This week, the layer 1 blockchain hit a major milestone as the NEAR token hit an all-time high at $20.33. This could be in part due to NEAR starting to hit major news outlets as Forbes named Near Protocol the third fastest growing cryptocurrency ecosystem for developers in 2021.

This is a sure sign that they are sticking to their goal of “motivating millions to join the Web3 revolution”. Bitcoin is trading down 12% on the month while NEAR is up 102%. This is an incredible achievement given that the crypto market as a whole has had a rough start to the year. 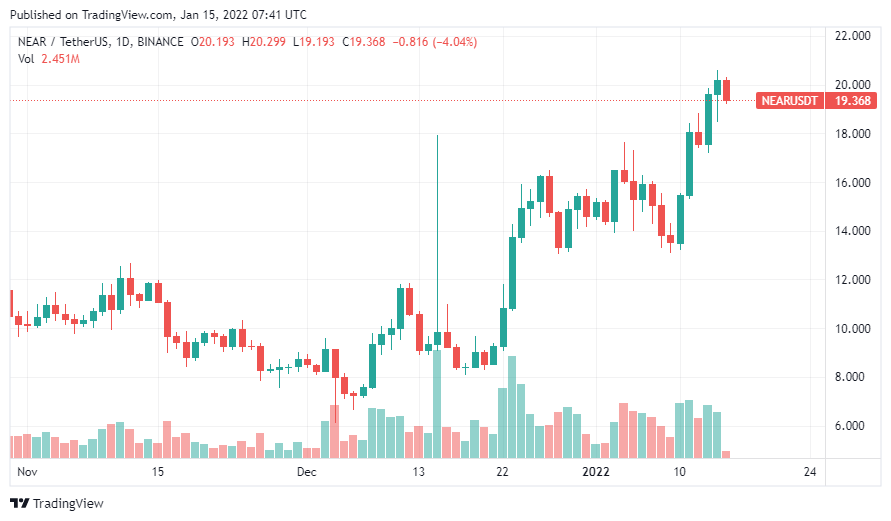 The bullish trend in the NFT market is drawing attention to NEAR as they entered very early to focus intensively on projects of this type. In it, the NFT Mintbase market center positions itself as the Shopify of the NFT world. With 919 stores currently, Mintbase is a key technology provider in the NFT sector.

NEAR Protocol is the brainchild of former Google engineer Illia Polosukhin and Microsoft developer Alexander Skidanov. In addition to the core team, projects that choose NEAR as a blockchain partner are rapidly becoming a very potential choice for individuals and organizations looking to build in the blockchain space. Flux, Mintbase and Paras are 3 different examples of how NEAR is expanding their ecosystem.

NEAR has a strong focus on accessibility and user-friendliness with a user-centric approach when designing features. At the same time, they are committed to expanding awareness of the utility of blockchain technology. NEAR Protocol users are enjoying these experiences.

In the last year, NFT has become famous as famous artists, developers, musicians and even athletes have jumped on the scene. NEAR’s NFT community has been well prepared and is now central to using ultrafast shard technology to mint NFTs with speed and scale.

Celebrities and entrepreneurs moving from the traditional market to the world of NFT are finding a new home with the NEAR Protocol. Electronic music producer Deadmau5 is working with NEAR and the Mintbase platform to release the NFT of his single. Half of the singles “This is fine” are sold on Mintbase. Thanks to a strong push in outreach, Mintbase now has more than 918 active markets.

Another project on NEAR of note is DAOREcords, which is a marketplace aimed at innovating record labels with exclusive events and drops in Metaverse Cryptovoxels. Users of the NFT Paras marketplace on NEAR can create digital trading cards for their collection. They are also applying to the Game-Fi scene with segment-owned NFT models for in-game experiences with the OP Games project. The experienced founders of OP Games are seasoned gamers and know how to harness player expectations in the Web3 video game arena.

So far, the NEAR developers have steadily focused on building a fast, scalable blockchain. As a shard network, it can process transactions faster and in larger quantities while maintaining the security of the blockchain.

The team also built a mechanism whereby the network can be dynamically adjusted based on user needs, making it more cost effective for existing users on the platform while also allowing for the required increase in activity.

The team also continuously emphasizes the role of education on their platforms, providing tools and courses through NEAR Academy, sponsoring as many developers as possible, and teaching how to use its apps. The project is built on the system.

This bold move has certainly scored with projects interested in entering the Web3 space. They recently introduced a hackathon Metabuild, which gives participants a chance to win from a $1 million prize pool.

NEAR Protocol is perhaps the underdog protocol by far but the growing number of projects in this ecosystem will draw attention to the many scalable solutions on offer. Accordingly, NEAR will quickly become the focal point in space.