Sinestrea – the girl who loves to sleep with her amazing ability to shock damage and recover will be an obsession for enemy champions. She has the ability to flexibly change her basic attack status to deal more explosive damage, hide, swap health with the target and can kill and revive herself if she has enough passive.

Surely anyone who likes to play this girl will experience the interesting mechanics of Sinestrea, the funny cases when playing this character. So let’s learn the mechanics of moves, combos, runes, auxiliary, equipment and badges with me!

Note: The information below I have drawn from my actual fighting experience in the process of achieving the rank of Chien General. Therefore, please accept the information in the most appropriate and open way. 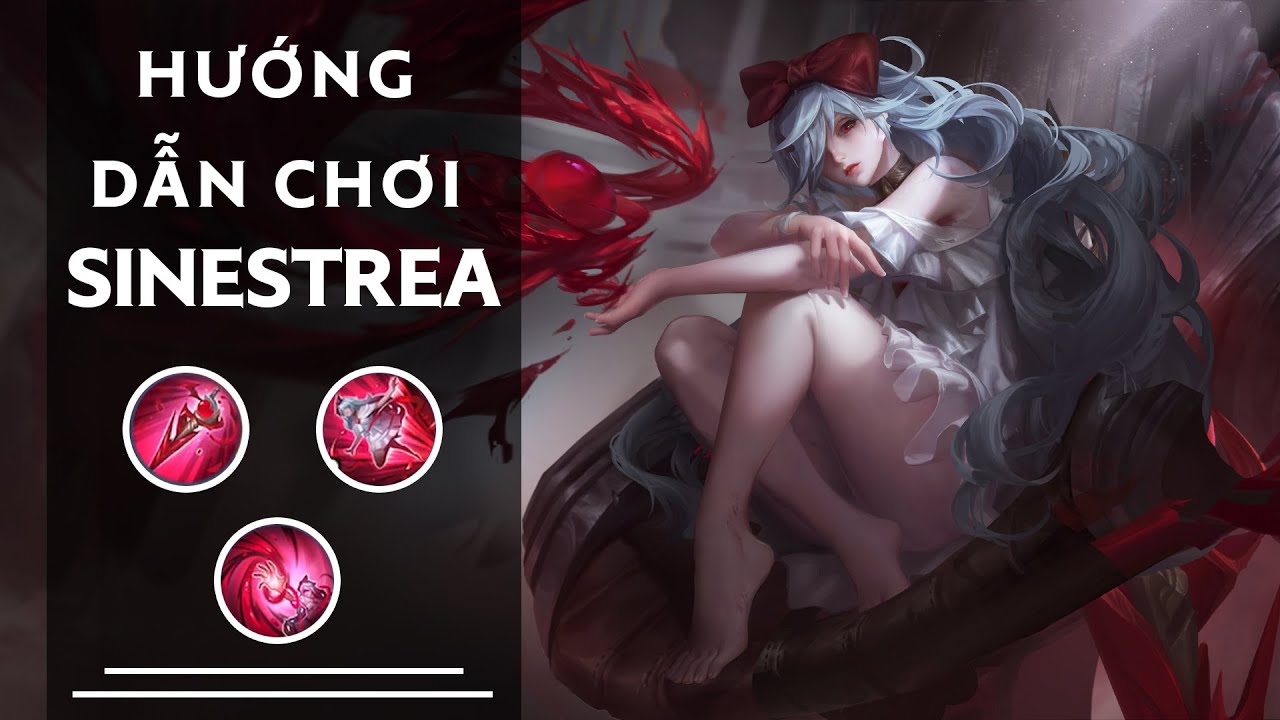 For this passive, Sinestrea will not be able to use active items such as Frost Orb, Evil Bow, etc. or auxiliary items.

This move has up to 2 times of reserve to help Sinestrea be more mobile, hiding and appearing with the passive ability to make enemy champions extremely uncomfortable.

This is a pretty important move for this girl because it’s her main damage move. Players must flexibly change their status to suit the situation, optimizing damage. In ranged form, Sinestrea can deal very high damage to multiple enemies by consuming 4% of her basic health to stab each enemy and then throw Blood Sword into the target area, dealing extremely high explosive damage or having can be summoned to himself to restore the health that has been consumed.

Because it has to consume its own blood, the player must consider using the skill properly. In addition, in this form, it helps her to move and attack like a general marksman. As for the melee form, it helps her have a terrible amount of health recovery without having to return, and also helps her attack melee with very high damage.

Sinestrea injects her own health into the target to initiate the blood exchange ritual. After the ritual ends, if the enemy’s health is lower than her own, it will be converted into magic damage to herself, more enemy’s health will help her heal 600 (+100% ATK) more). In addition, when the health itself is below 40%, Sinestrea will gain 30% movement speed.

This move seems to be a double-edged sword for Sinestrea. Therefore, you should use this skill wisely, don’t use it in a hurry. In the combat phase, you should be alert, do not click indiscriminately to avoid many self-kill phases as well as save the enemy. If you use it properly, this move will be like giving this girl a life.

This general only needs to ask that you use flexible moves, move reasonably from skill 1 and change the status of skill 2 to poke, attack to deal damage, should not abuse the ranged state because hitting a lot will reduce your health, so you should hit range and then return to melee form to make sure the damage is both great and the recovery is terrible.

Sinestrea has a lot of ways to build, depending on the situation of the match and the enemy generals on the other side to match it up! This girl also has two positions in the jungle and the top, going to the top is also quite good but the efficiency rate is very low, early game is difficult to take advantage. Going to the jungle is more popular and of course this girl’s advantage. Every style has its strengths and effects, depending on your build.

Go to the forest

There will be two ways to build this girl: damage and attack speed.

In addition, in the 5th slot equipment you can change flexibly to deal with the enemy team more effectively, not necessarily up like this.

Go to the top

It seems that the top gear is not much different from the jungle. Also like I said above, you should also change the equipment accordingly in the 4th slot equipment (Holy Sword).

With this rune board can help her have a more stable output damage in the early game.

Addiction spells and insignia for Sinestrea

How to play Sinestrea for a master

Here I will guide you Sinestrea to go to the jungle!

In the early game, Like many other junglers, you try to finish farming all the jungle monsters. Note that when at level 1, you should upgrade skill 2 first. Putting Blood Seal on monsters and then attacking other monsters will farm faster, save time and can move down to gank to put pressure on the enemy team first. Another note is to farm the charm closest to the Dragon position, ie opposite to Caesar so that when you finish farming you go to the top gank the enemy team then eat Caesar level 1, if possible, after eating with the team. Eating Dragon will definitely create a great advantage for the team. Now that you are level 4, having the ultimate skill seems to have an extra life for you, so you should use it at the right time and most effectively! Avoid getting useless on the board in the early game.

In the mid game, Sinestrea starts to get stronger, that’s when she disappears in combat, so you should max out her 2nd ability first, because this is her main damage move. Although starting to get stronger, you should not “delusional” rush out. Point out at the right time of the fight, or have a Tanker to take damage for you and then find the main forces of the enemy team to attack and then you can escape. If you are green, try to kill the enemy team, push the turret as quickly as possible because if she is green, she is really a “monster”, the damage and recovery is extremely high, making the enemy team cry. Try to finish and eat as many lives as possible to accumulate the passive Blood Flower for yourself.

Like I said above, if you’re green, try to finish the game as soon as possible because Sinestrea at the end of the game quite weak compared to other enemy champions. Just moving or standing in the wrong position can be very high! Although at the end of the game she is very strong, has high damage and has a strong recovery ability, but she shouldn’t start a fight, as long as you rush out sometimes in less than 5 seconds, it’s already on the board, every champion at the end of the game takes damage. Shock damage is very strong like Paine, Zuka or ADCs like Thorne, Yorn, etc. So you should stand behind Tank to poke with skill 2 in the form of ranged or stalking mainstays to attack. Also, use your ultimate as well as your Blood Sacrifice if you have 7 blood flowers, if you include the armor, it seems that this girl has 3 lives!

An illustrative example that I want you to have a look at about her ability to deal high damage and heal. Specifically, Sinestrea can alone weigh 4 with her extreme passive (respawn ability).

Above is a summary of ways to beat the Sinestrea girl well. Please refer to the game and try it out. However, to be able to play well and climb to a high rank is mainly in your hand! Hope all the above information will help you improve your playing skills.

The increased volatility in the digital asset space has continued over the past few days and the total daily liquidations have increased to half a billion USD. It is reasonable to say that the crypto…