Last week was indeed a stormy week for traders after the Fed kept interest rates unchanged, but at the announcement today, the gold only increased, not decreased ??? However, the next day with just one Tweet from Mr. Golden Trump plunged 200 Pip with only 1 H1!

Not only that, during the general election in the UK on December 12, the currency pairs traded with the pound also increased by hundreds of Pips.

After a week of so many events, this week is also very close to Christmas and New Year is the time when many banks are on holiday, how will the currency pairs fluctuate? Let's take a look at our following analysis.

One of the most important events that took place last week was that China and the US reached a Stage 1 agreement in which a 15% additional tariff on $ 120 billion of Chinese goods would be cut by one. half, to 7.5%, however, the 25% tax rate on 250 billion USD of Chinese goods will be unchanged.

This means that the United States has to cut taxes as well as December tax, in exchange for a commitment from China to import US agricultural products with a total value of 40-50 billion / year in the next two years. Thus, basically the trade negotiations have temporarily reached an agreement, will avoid tension in the near future, even though the road to agreement and comprehensive agreement is still very far.

So the question that every trader is interested in right now: whether from now until the end of 2019 will everything end well, well?

The reason for such questions, because during 2019, the trade war between the US and China, typically here is the imposition of taxes and ban on import and export of agricultural products. Making not only gold but many other currency pairs jumped wildly, causing many traders to wake up in the morning to see their account burnt into coal without understanding why!

Over the past week, gold prices have made many traders miserable. After the Fed announced interest rates remained the same, many traders jumped into Sell gold. But unfortunately only increase, not decrease! And after killing so many traders' accounts, the very next day, with just a brief tweet of Mr. Trump, gold rushed like a car without brakes (200 pips) in just 1 hour. lake!

After 6 years, since climbing to the top of 1557 in September, gold has continuously created lower peaks and lower lows as shown below. 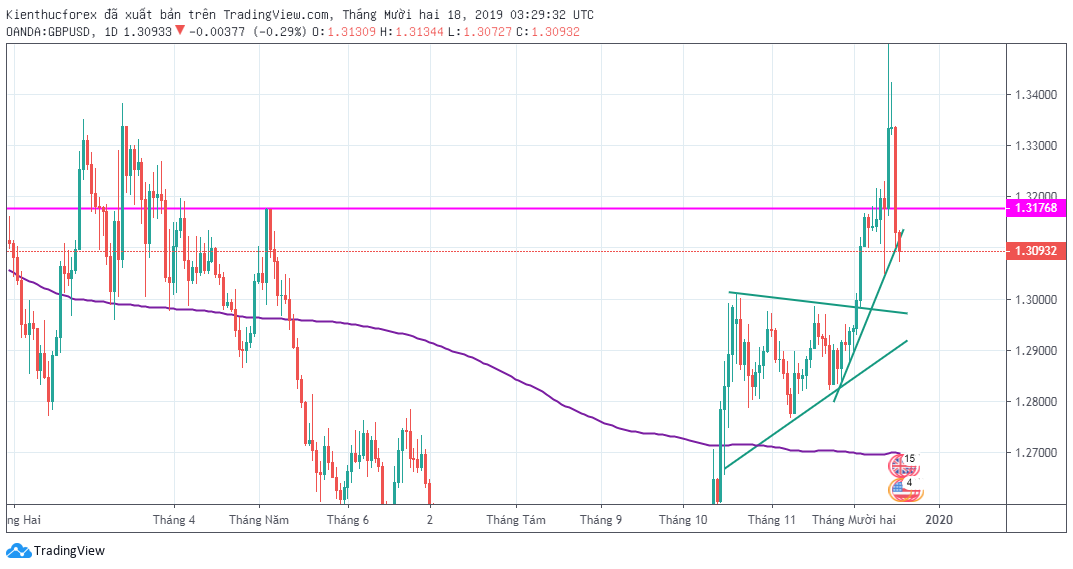 In addition, gold not only moved in the wedge but gold also narrowed gradually, almost only going in parallel price channel. 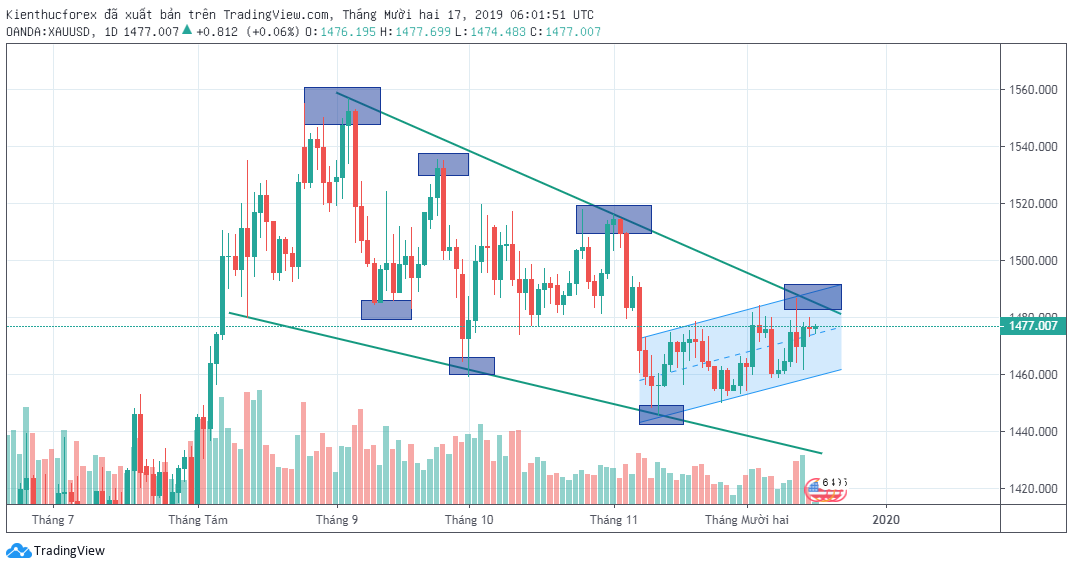 Not only that, the candle on Monday, is a doji tree that can show both the buyers and the sellers are puzzled, hesitating after 2 volatile 5th and 6th days last week. Especially yesterday, gold tried to test resistance at 1480 but failed.

Combined with a basic analysis of the Central American agreement that completed phase 1, the year-end fund will take profits or summarize one year, with the last Monday's candle being a doji candle, so there corpus luteum will decrease sharply in the future.

However, does not exclude the possibility that gold will still increase before falling, because gold which is an "unyielding horse" it may still follow the general trend, as here is for example reduced. But before that, it will have to do a massacre to kill a lot of traders, before it can rush down!

Ending on Tuesday was a Doji tree so it is obvious that the market is entering a hesitation trend. Especially, gold has not been able to create lower lows until today, meaning that gold is still in the accumulation period, so it is likely that today gold will continue to move in the price channel as shown below (candlestick chart below). H1) Based on the points I analyzed above, I still preserve the idea that I will sell gold, but with the happenings like yesterday Monday, I will wait for the gold price to break through the parallel price channel above especially if possible. create a lower bottom I will enter the LL command. Therefore, please wait patiently below 1475 and Sell, stop loss will be when the price broke above 1477.

Similar to gold, EURUSD last week saw a lot of volatility related to the UK general election, in which Prime Minister Borish Johnson with the promise of ending Brexit gained overwhelming control. And after the most dramatic victory ever, Mr. Johnson began planning to keep his promise, to hold a vote in parliament this Friday, December 20, to be able to leave the EU on January 31, 2020, as planned two years earlier.

Therefore, this week or more precisely from now to Thursday, currency pairs like EUR and GBP will probably be sideway to wait for news from this vote.

After reaching the bottom of 1.08 at the end of September, EURUSD has gradually recovered to create higher lows. However, it is really hard to say whether or not the trend will rise again with the EU. 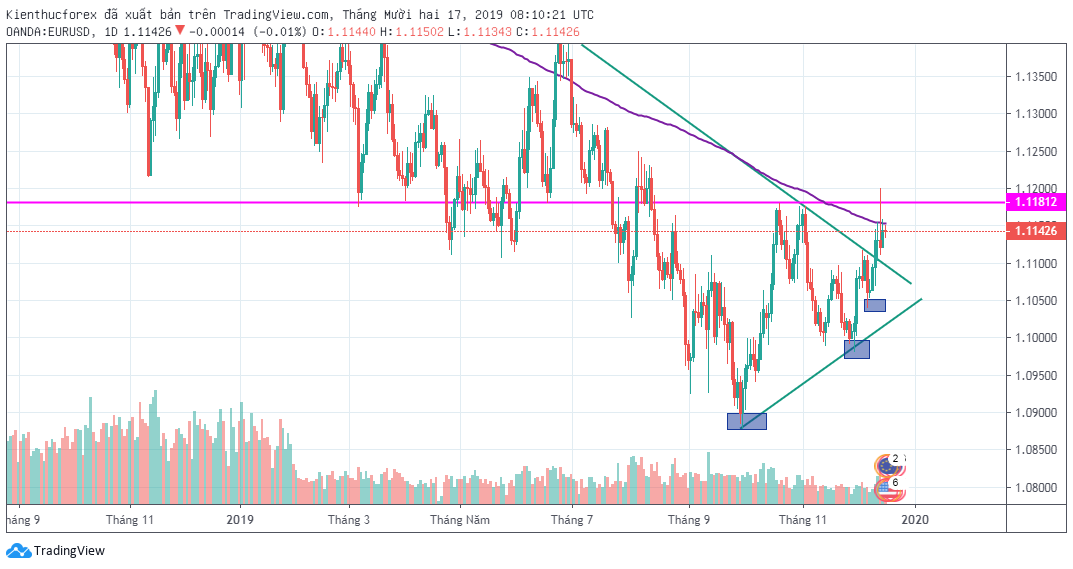 Because as you can see in the picture above, last Friday the EU increased sharply beyond the resistance of 1,180. However, selling pressure soon followed, causing the candlestick retreat to form a shooting star shooting star star.

Not only that, according to the D1 frame chart, all still closed candles below the EMA 200. This shows that, in order for the market to really prosper, the EU must create a higher peak. At least here is a resistance break above 1,180, then resistance will turn into a support for the EU to rise again.

Thus, the present time should probably just stand outside the observation. Because this is a very sensitive time and need to wait for the results from the "divorce" between the UK and the EU to have specific confirmations and trading plans.

My analysis above mentioned the issue of parliamentary voting on Friday for Britain's Brexit issue. Therefore, not only the EU but also the GBP will be greatly affected by this decision.

On Friday, after a sharp increase from Prime Minister Borish Johnson's victory to GBPUSD on Monday, the candle was closed on a day with a tombstone doji. This shows that the buying side is not nearly enough pressure to continue pushing prices higher after increasing on Thursday and Friday last week. While the UK election has ended the most important issue to be solved now will be Brexit, which means that almost all the good news has been pushed out for the previous week to get buyers excited.

Another interesting information is that on Thursday there will be MPC Official Bank Rate Votes which is a vote of 9 members on the interest rate of GBP, so GBP will also be greatly affected by this news. 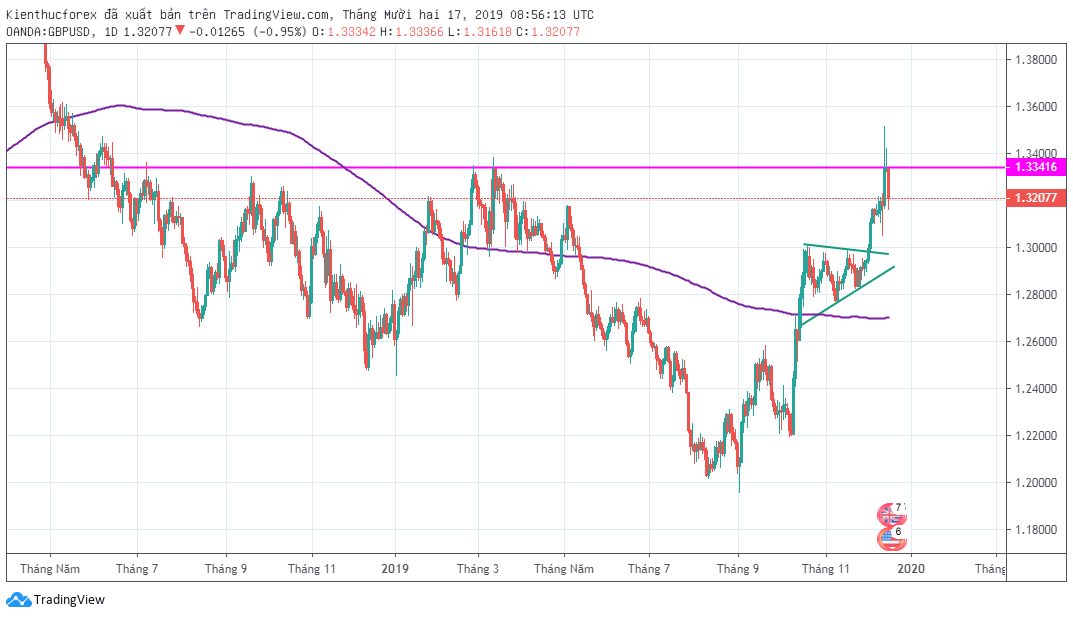 Based on the D1 candle on Friday and Monday, this week shows that the area of ​​1,334 is still a strong resistance. If GBPUSD wants to rise, it will be required to surpass this level to turn resistance into support. With the D1 candle on Monday a doji tombstone can clearly show that both sides are hesitant, combined with the resistance at 1,334 shows that GBP may fall to find support at 1,317.

The candle on Tuesday ended with a long red candle as well as a resistance break of 1,317 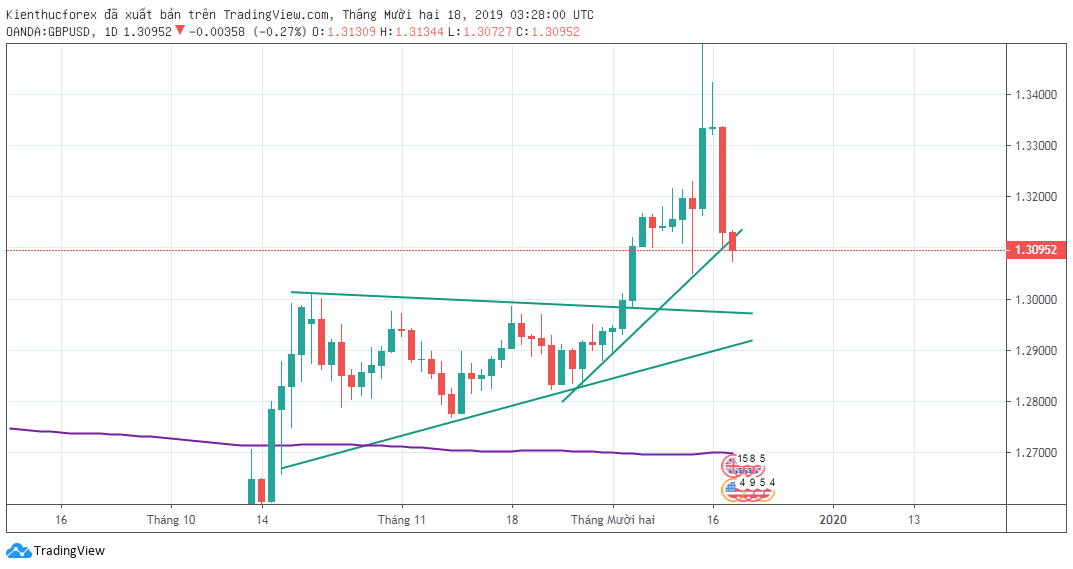 Therefore, today with GBP, you will sell as the main reference at the frame smaller than H1, you can see that GBPUSD has broken the trendline, most likely will find it to retest this line because of closing the H1 candle. It was just a Hammer candle, so you should wait for the price to recover to sell: 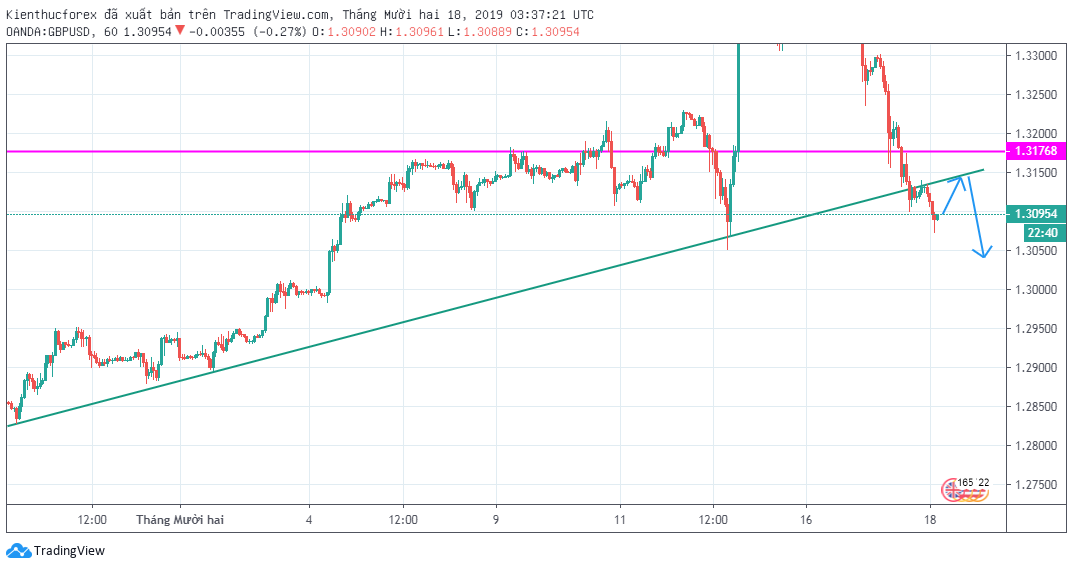 On Thursday and Friday there will be a lot of GBP related news including MPC Official Bank Rate Votes or voting of 9 members on the GBP rate You need to be careful with trading and cut losses carefully because GBP has a wide fluctuation range and run wild so to avoid color flight accounts, never forget to cut your losses. Good luck!