If you turn off 1 of 7 background tasks in Task Manager, your computer may freeze, freeze or crash the operating system. So you have to memorize the names of these tasks.

“ntoskrnl.exe” also known as NT Operating System Kernel, is a system file of Windows, it is responsible for many tasks such as hardware emulation, memory handling, and provision of kernel and real classes. executable for the Windows kernel space. In addition, this file is also responsible for managing and compressing temporary files (page files) to reduce memory usage. 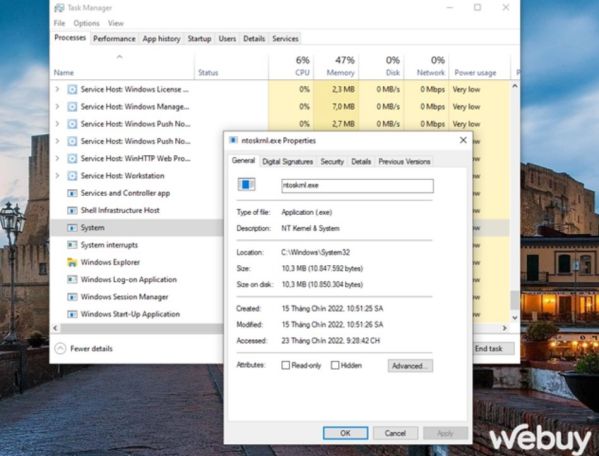 ntoskrnl.exe shows up in Task Manager as “System”. And this can also be understood as an important system file, so Microsoft naming it System is not easy to understand.

If you turn off System (ntoskrnl.exe), the consequences will be extremely severe. Since critical drivers such as disk access and USB devices rely on the System to do its job, closing this process locks the system and requires a hard reboot. If you need to restart the System (perhaps when troubleshooting high CPU usage), you should restart your computer normally.

If you notice the System running at high CPU levels frequently, this may be a sign of a hardware problem.

The answer is No! 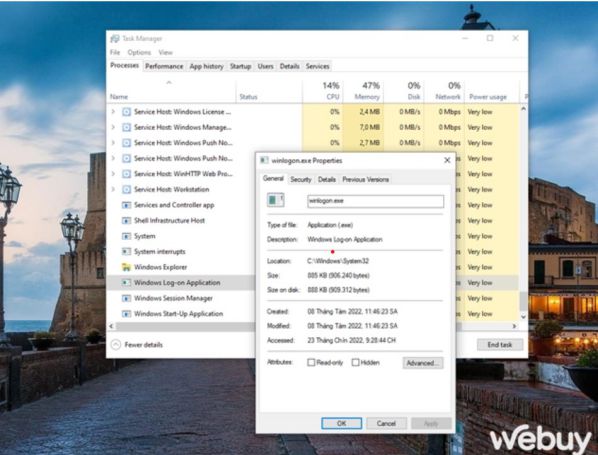 The first function of the Windows Logon Application is to load user data when you log in. Any changes to the registry that you have previously made are saved for your account only, and they will all be reloaded when you log in, thanks to this process.

Winlogon is also extremely important for security. Once you’re signed in, this will provide you with security options and display them on the Windows Security screen, which includes some quick links for you to change your password, sign out, and perform. perform the same operations.

In addition, Windows Logon Application is also a task that provides quick screen lock options or displays Screensaver. If you try to use the End Process command on the Task Manager, Windows will warn you that this is not a good idea. 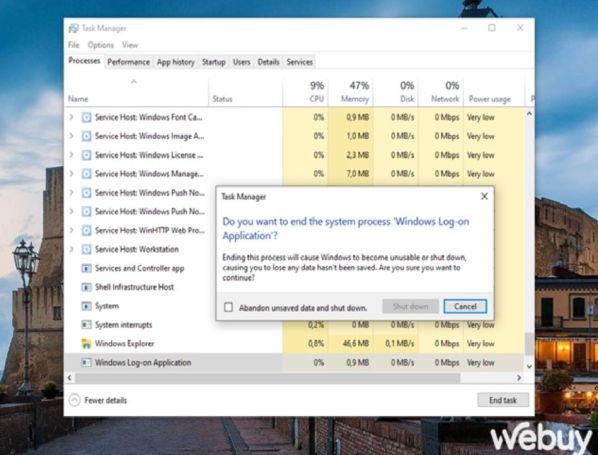 If you try to do that anyway, your Windows will go to a completely black screen and there is no hope of recovery. At this point, you will have to restart the computer for the process to run again.

Windows Start-Up Application is the process that keeps Windows stable when you log in for the first time and keeps the system running for the entire time it is used.

The most important function of Windows Start-Up Application is like a springboard for most applications and processes that run in the background every time you start Windows. This includes starting other important processes such as “lsass.exe” and “lsm.exe”. 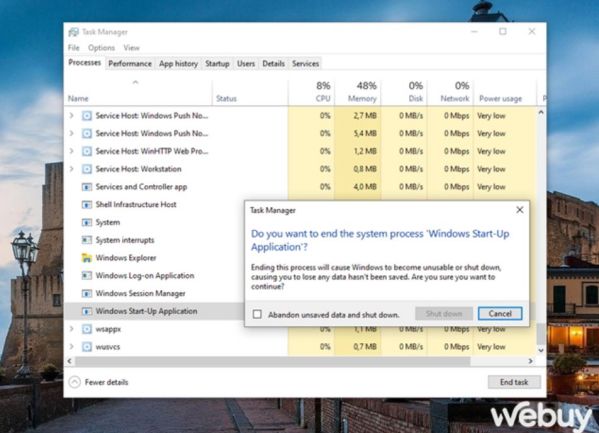 The Windows Start-Up Application will run until you shut down your computer. If you try to disable this process, you will receive a Windows prompt warning. And just like Windows Logon Application, if you turn it off, the system will hang to the point of needing a reboot. 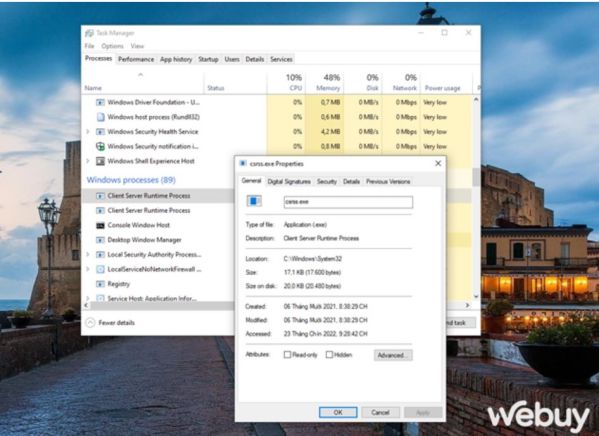 The two most important roles of the Client Server Runtime Process are shutting down Windows (Shut Down) and launching the “conhost.exe” process, which launches the Command Prompt. It doesn’t seem like much, but it’s an important process. If something goes wrong and the process doesn’t run at startup, you’ll get a blue screen error.

As you might have guessed, if you ignore Windows’ advice and proceed to turn off this process, the system will freeze.

Windows Session Manager has been around since the time of Windows 3.1 version, and it is also one of the important background processes.

Whenever Windows is about to start, Windows Session Manager performs a few preparatory steps. It will proceed to map the drives and create virtual memory paging, etc. Once done, it will invoke the Windows Logon Application process and you will see the login screen appear. 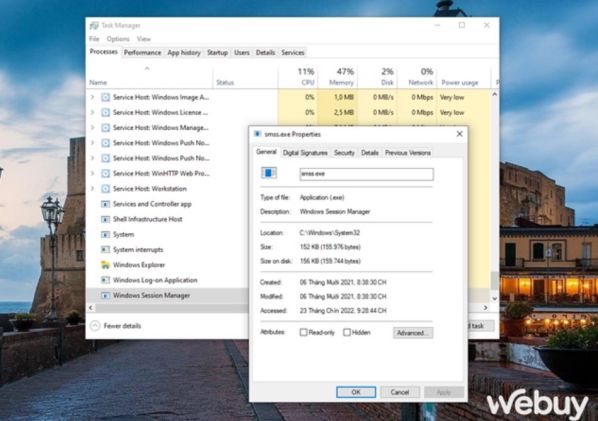 Apparently, the Session Manager persists after you log in. It monitors both the Windows Logon Application and the Client Server Runtime Process to wait for either process to terminate.

If something happens to the Windows Logon Application and Client Server Runtime Process, Windows will shut down as usual. But if either process terminates unexpectedly, Windows Session Manager will freeze the computer.

If you’ve used a previous version of Windows, you may have noticed the new changes Windows 10 makes to apps like the clock and calendar. The Shell Experience Host process processes these elements, along with the Start menu or Taskbar color and transparency effects. 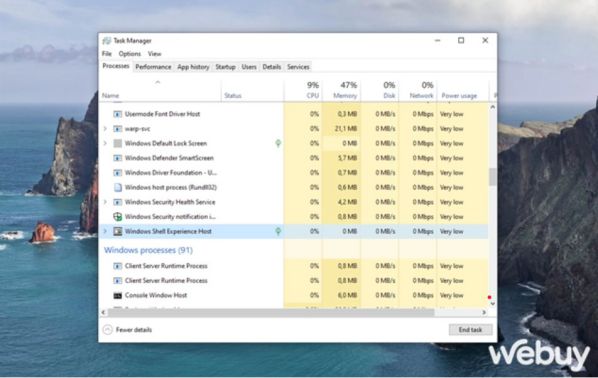 In addition to the updated look, the process also works to display Store apps in a window. If you use a slideshow as your wallpaper, you can thank Shell Experience Host for making that possible.

Disabling Windows Explorer will not only close any open File Explorer windows, but will also render the Start menu, Taskbar, and System Tray unusable. However, restarting Explorer is actually very easy and sometimes automatic. 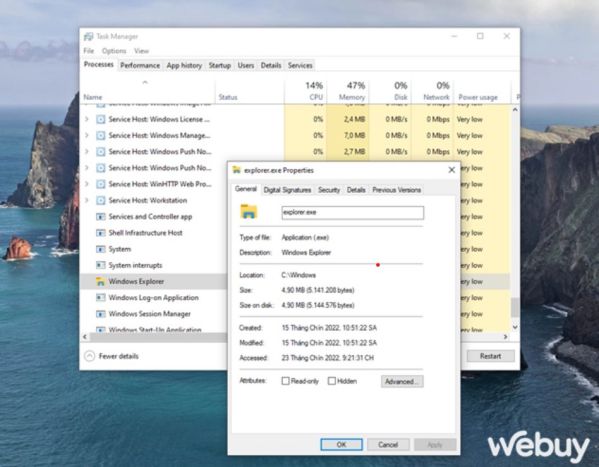 As of Windows 8.1 and later, you can right-click Windows Explorer and select Restart to immediately shut down and relaunch the process. If you’re using Windows 7, you’ll have to right-click on it and select End Process, then go to File > Run new task and type “explorer.exe” to get it working again.

There are other ways to restart File Explorer if needed, so keep them in mind the next time you accidentally end a Windows Explorer task.

The processes that this article provides are unlikely to be the only important processes running in your Task Manager. But they are all important to your Windows experience in some way and by now you should know what they are for, right?

Thankfully, in most cases, Windows prompts and protects you from the wrong actions of shutting down an important process by mistake, so you don’t have to worry much.

End: Above is a list of 7 important background tasks in Task Manager that you must not turn off. If turned off, there is a good chance that some unexpected problems will occur. So please keep in mind.

This article aims to show you how to use lsof to monitor open files on Linux. Please…

After a long period of use, your iPhone becomes slow, plus the memory is full, making it…