Advance Block Pattern A rising Japanese candlestick pattern is quite rare in the past but has been more popular in the last decade. Although not giving a definite reversal signal, this candlestick pattern can warn when an uptrend is getting weaker. From there, you can use the Advance Block Pattern in combination with other indicators to support your buy / sell or take profit decisions.

What is Advance Block Pattern

At first glance the model, maybe many of you will be confused with the model Three White Soldiers (3 soldiers). However, unlike the Three White Soldiers, the 3 candles of the Advance Block Pattern show a reversal signal from up to down. We will explore the identification characteristics to be able to understand and use the model correctly in the following sections.

To correctly identify the Advance Block Pattern, you need to keep in mind the following characteristics: 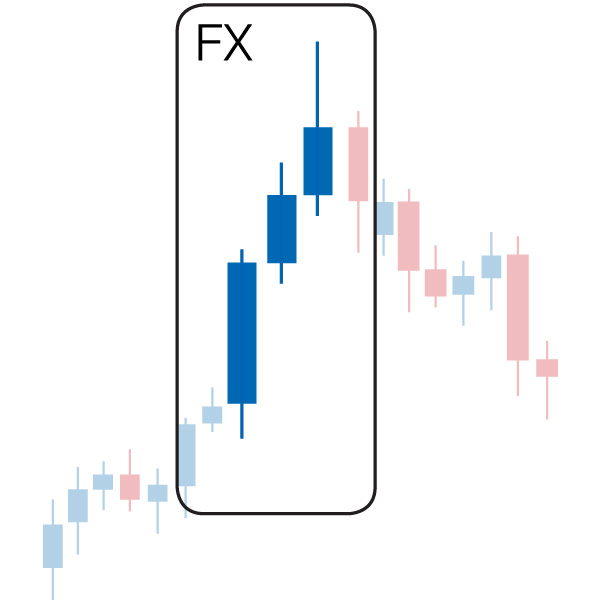 Thus, the Advance Block Pattern will appear in an upward trend with 3 candles increasing continuously but having a decreasing strength.

One thing to note is that many people think that in the Advance Block Pattern, the candlestick at the back must be lower than 70% of the body of the front candlestick, however in the forex market, the gaps are seldom. happening. Because of this, many traders who trade on Japanese candles usually accept that the opening price of the next session just doesn't need to be higher than the opening price of the previous session, although the strength of the model will be slightly reduced.

The Advance Block Pattern emits a bullish signal that has begun to weaken. However, you should note that this model has not confirmed for sure that the market has actually reversed.

The Advance Block Pattern tells us that market sentiment is evolving in the following way:

The price is going up and continuing to develop the trend with a strong bullish candle and rise to a new price (number 1 candle). After such a strong rally, buyers became more confident. After that, the second day candle continued rising, but then turned back down and closed, rejecting the previous price. It shows that some buyers have begun to deny or sell sellers are watching above. The same thing continued with the 3rd candle with greater intensity, the price was weaker, the longer the tail of the candle showed that the bulls were gradually getting weaker.

To help you better visualize this model, we will look at a practical example. Below is a GBPJPY chart on the 1 hour time frame.

You can see the Advance Block Pattern first appeared just to the left of the illustration. All 3 candles are white bullish candles, the lower candlestick is below the opening price of the previous candle, the body is gradually smaller, forming a connected string upwards. Besides, the third candle has long upper shadow. So the Advance Block Pattern was created and after this pattern was completed, the GBPJPY pair continued to rise but then became weaker and moved sideways for a while. 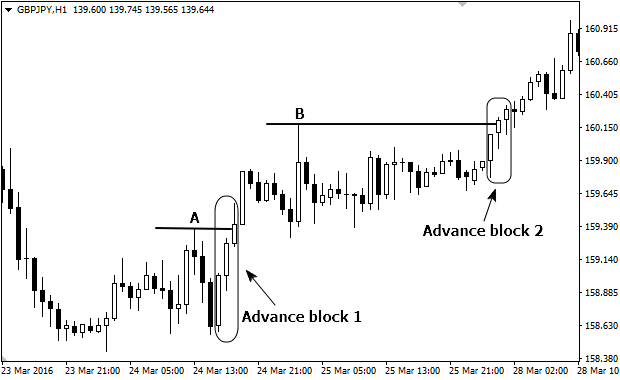 On the right side of the chart, the Advance Block Pattern is created again, but in the second, the third candle has a lower upper shadow so the signal is not too strong, The market continues to go up after that.

Instructions to trade with the Advance Block Pattern

The signal of the Advance Block Pattern is not strong. So if you rely on it to catch the peak, it will be extremely dangerous. Traders should not use the model alone to enter buy / sell orders. Instead, we recommend you trade the reversal with technical divergence signals, the Advance Block Pattern is just an additional factor, which increases the confidence level when entering the order.

You can refer to our divergent trading guide articles in the following articles:

We introduced to you the identification and meaning characteristics of the Advance Block Pattern. Because the signal of this candlestick pattern is not too reliable, you should only consider it as an additional factor when analyzing the market only.