Three White Soldiers are three consecutive rising candles, opposite the three Black Crows' bearish candlesticks. This pattern appears at the bottom of a downtrend and keeps prices moving up for three consecutive trading days, like three soldiers marching. This candlestick pattern shows when the trend is getting weaker, thereby helping you trade reversal or determine when to take profits. In this article, we will introduce you to the characteristics and trading strategies of the Three White Soldiers model.

What are the Three White Soldiers? 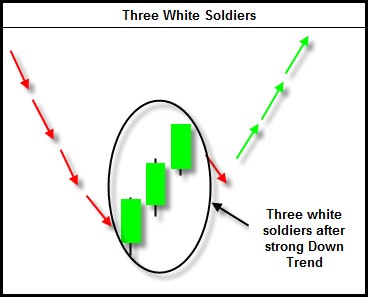 Characteristics of the Three White Soldiers

For the forex market, the Three White Soldiers model is identified based on the following characteristics:

Three White Soldiers are visual models so they are easy to identify with the naked eye.

One point to note is that the original Three White Soldiers pattern requires the opening price of the back candle to be above the previous close, which is the gap. However, with high liquidity market such as forex, the opening price in the next session is usually the closing price of the previous session, except for the last days of the week or when there is strong news. So here, we don't need a gap opening pattern when opening.

You should also pay attention to the length of the candles, they should be approximately the same length or descending. If the first 2 candles have the same length but the 3rd candle has a lower body, it shows a weak bullish force and lowers the reliability of the pattern. 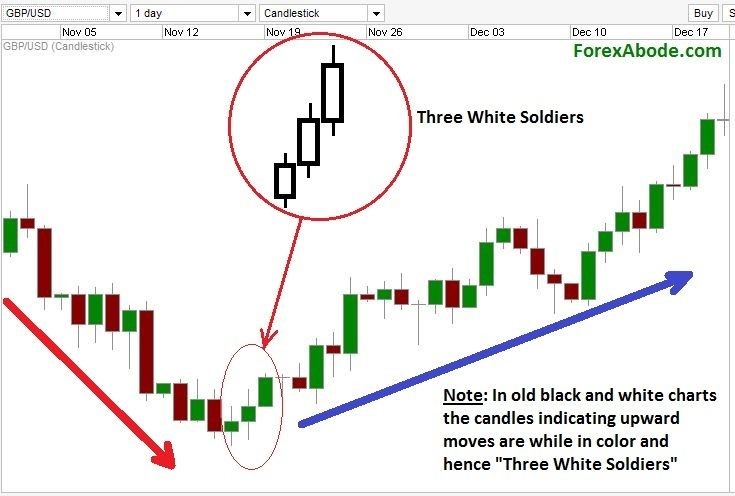 After a period of active control, the seller has gradually weakened while the buyers increased. The continuous upward movement for 3 consecutive sessions showed that the strength of the buyers could not be underestimated. Positive market sentiment is pushing prices up, and this strong reversal confirms that the downward momentum is weakening.

Below is an example on the EURUSD graph on the D1 frame. Initially EURUSD was in a downtrend when it encountered a bullish engulfing candle, which is a strong reversal pattern that signals an end of a downtrend.

A few days later, EURUSD had a pullback and created the Three White Soldiers pattern, reinforcing the reversal signal for the previous engulfing candle. Finally, the market after moving sideways for a while, broke the cumulative threshold to go up to form an uptrend. 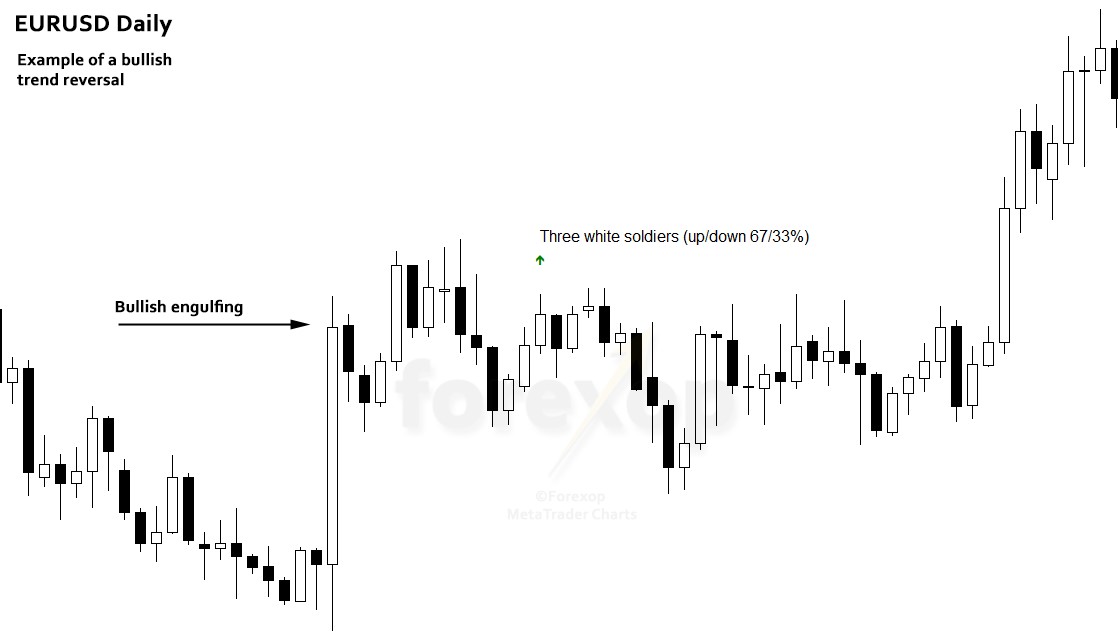 When the Three White Soldiers pattern is created at the resistance or oversold zone, we can enter a sell order.

As further confirmation is required, you should not enter the command as soon as the model is complete. Instead, place a pending buy order a few pips above the top of the third candle or wait for the next candles to evolve.

Below is an illustrative example, the first arrow on the chart marking the Three White Soldiers candlestick pattern. If you rush into the buy order as soon as the 3rd candle ends, it is likely to hit a stop loss because the price then failed to reverse.

Meanwhile, if you place a pending order, your order will not match when the price goes down and will avoid a bad trade. With pending orders, the position is only opened after the price goes up. In this example, you should also note that the 3rd candle of the model has a much smaller body than the 2nd candle so the signal is weak. 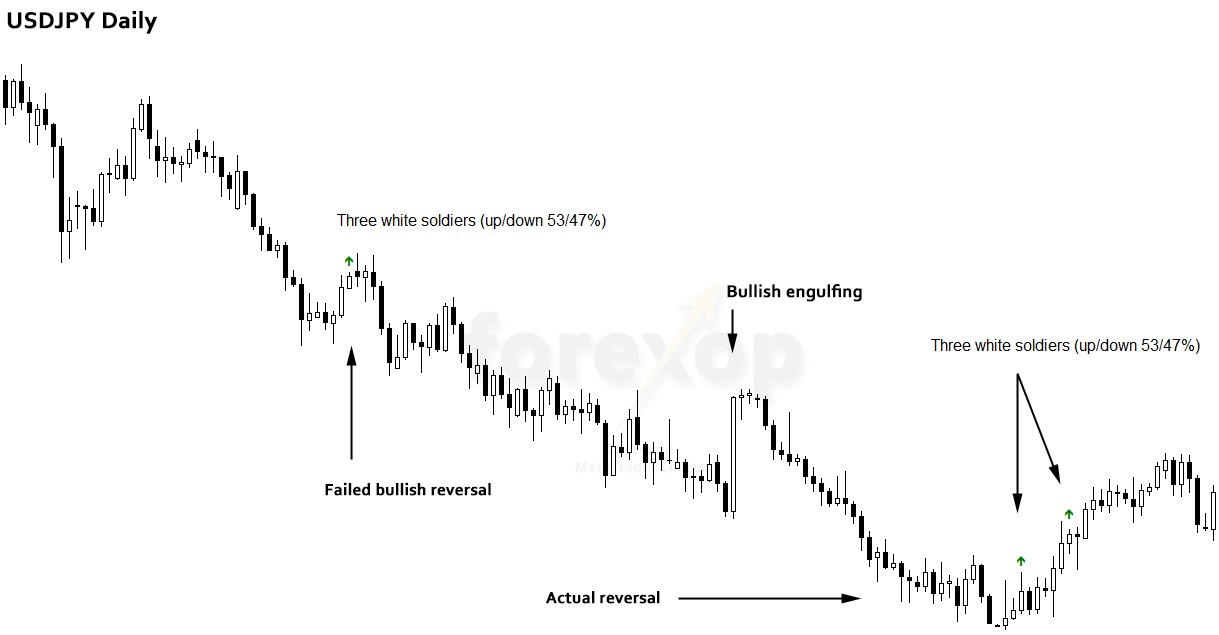 For the Three White Soldiers model, the stop should be placed just below the bottom of the third candle, the stop loss will be quite short. In some cases of short-term market noise, prices may go down and cut loss before turning up sharply. However, set a stop loss because you always have the opportunity to observe the market and enter the order continued after the stop loss is touched. In case you do not have enough time to follow the market, you can loosen the stop loss on the previous bottoms, but still have to ensure a reasonable risk / reward ratio.

Meanwhile, profit-taking points will be placed in the old peak areas above.

We have introduced you to the Three White Soldiers candlestick pattern. This pattern appears in a downtrend and indicates that buyers have controlled the market for three consecutive trading sessions. With the wise strategies and risk management as shown in the article, you can take advantage of the power of models like this. Good luck!