Home/Can a smartphone replace a PC? – Knowledge sharing blog
Note: Please read the article carefully before proceeding! If in the process of using you encounter any errors, such as broken download links, slow loading blog, or unable to access a certain page on the blog … then please inform me here. Thanks!

It is easy to see now that, although the smartphone market has begun to saturate, the popularity of smartphones is still greater than PCs, and will always be.

Smartphone OEMs like Samsung, LG or ASUS are trying to integrate more technologies with the ambition that their smartphones will replace PC computers in the near future, and they want to lead the trend.

So can smartphones replace PCs? Please find out with me right in this article …

PC – Personal Computer, meaning personal computer. It could be Laptop or PC Desktop.

It has a CPU, GPU, keyboard, monitor and runs Windows, Linux or MacOS. The PC is referred to as a specialized device for office data entry, image editing, programming, gaming, and more.

For the time being, the smartphone is known as a compact smartphone, with touch screen, powerful chip, buffalo battery.

Smartphone will be similar to Mobile Phone: To listen and call, and it will be smart enough for you to play games, watch movies, take photos, …

From the definition, we can see: PCs are more specialized, and smartphones are more mobile. So what have smartphone OEMs been doing to turn smartphones into PCs? 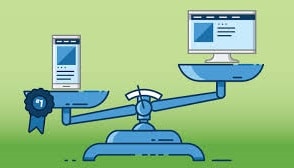 #2. The change of smartphone

Smartphones and PCs have been changing over time, and that change shortens the hardware gap:

A Snapdragon flagship chip can be clocked as high as, or even higher than, an Intel Core i3 or i5 chip on a PC.

The smartphone is also perfectly compatible with accessories such as a keyboard, mouse, external hard drive or even a Gamepad. In short, smartphones and PC computers are closer to each other in terms of hardware quality. As for software, Samsung DeX from Samsung provides users with the interface of office applications similar to PCs, the same operations with PCs.

So are smartphones ready to replace PCs?

The answer is no ! Smartphones are not enough to completely replace a PC.

The first reason: About the ability to replace hardware. Not to mention Laptops, PC computers give you the ability to customize your hardware as you like.

You can replace CPU, GPU, custom Ram and Rom, radiators, upgrade modules and drivers via software, etc., replacing it at your own discretion, to meet your needs.

Smartphones cannot do that. You can only replace an existing component when it's broken, not customize what the OEM has arranged unless you buy a new device.

The second reason is dedicatedness: You cannot program on a smartphone. If so, which platform will you program? Java? Or some simple electronic devices?

Reason 3: Smartphone to be able to turn into a PC will lose Mobile. Smartphones were born and became more popular than Tablet due to its mobility.

And to turn a smartphone into a PC, with the technologies that OEM smartphones provide us, we need a smartphone, a keyboard and a mouse. It's not much more than carrying a laptop with you. Smartphones can completely replace PCs, but for now this will not happen.