Home/Analyze GOLD, GBPUSD and AUDCAD for the week from December 2 to December 6, 2019

This week we will analyze some specific currency pairs: GBPUSD; XAUUSD; AUDCAD

Transactions this week and next week will probably be greatly affected by the British general election on 12/12 following a call from British Prime Minister Johnson to break the deadlock in the Brexit process.

According to the latest polls, the Conservatives are leading at 7% to 11%, but the Labor Party is close to catching up. Perhaps so the market is almost waiting to consider the upcoming election to determine a new direction for the market.

Therefore, during the past time, GBPUSD almost fell into a state of accumulation and also formed the pennant pattern throughout the beginning of November.

Therefore, today when prices break through this level, many traders believe that this week's dominant trend may be to buy instead of sell. However, to be sure the trader will probably have to wait for the candle to close today to decide on the next trading plan. 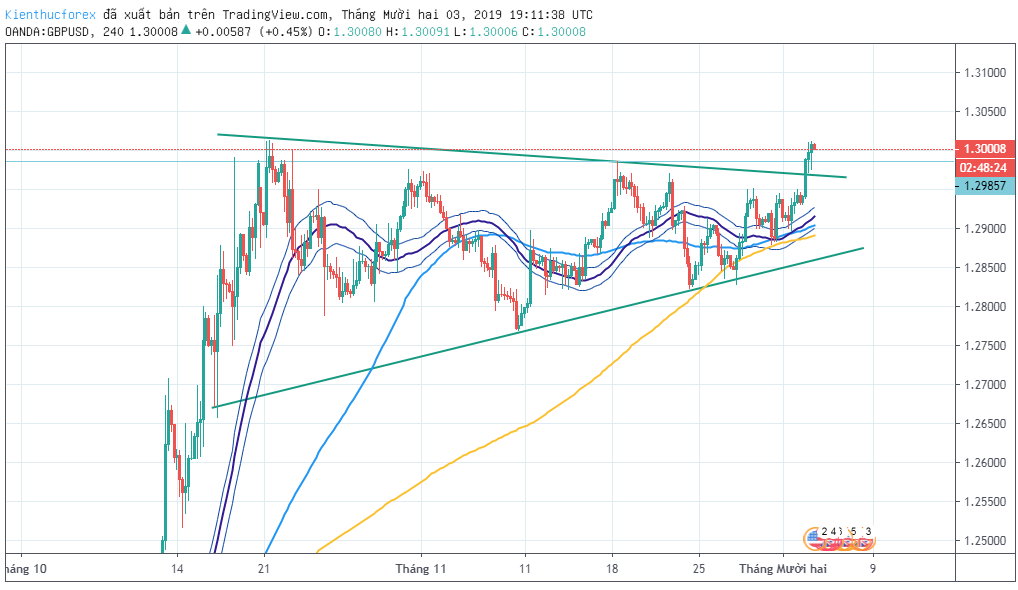 D1 candle yesterday closed above the resistance level of 1.1298 is likely to advance to the next landmark of 1.3034. However, you should also note that even if the candle closes above 1.1298, there is nothing sure to confirm the price “flies” to 1.3034. It is likely that there will be a sideways scenario, waiting for the upcoming election. In particular, after the election there will be many decisions related to Brexit. So at this point you should be very careful when trading currency pairs GBPUSD. 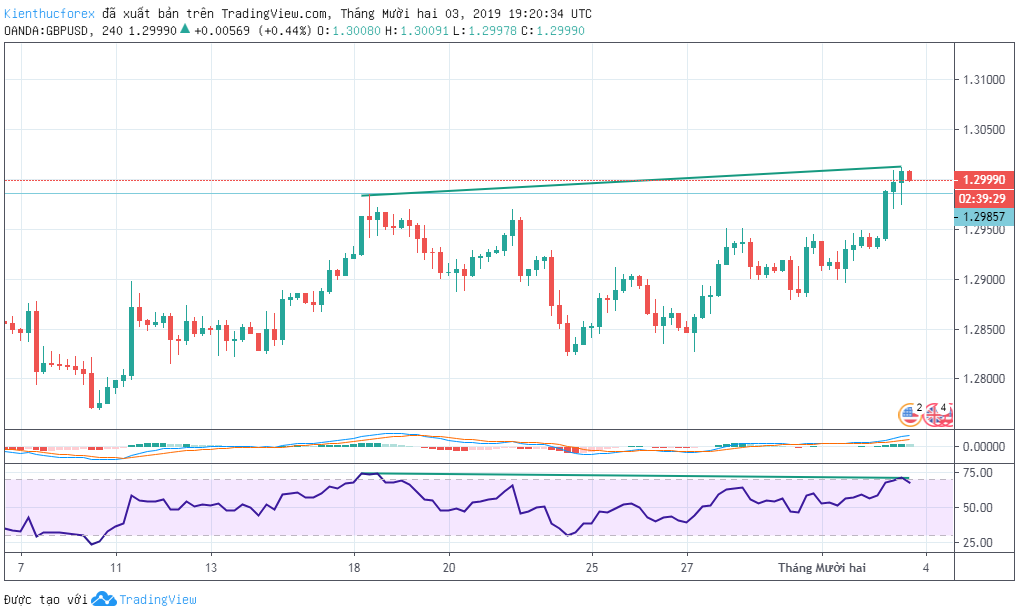 However, you notice in the frames from H4 and below GBPUSD showed signs of divergence, showing that the buyers are no longer too salty but to push prices higher. Therefore, you should consider waiting for signals to execute Buy orders or have a specific stop loss to avoid the situation of gonging, guys. 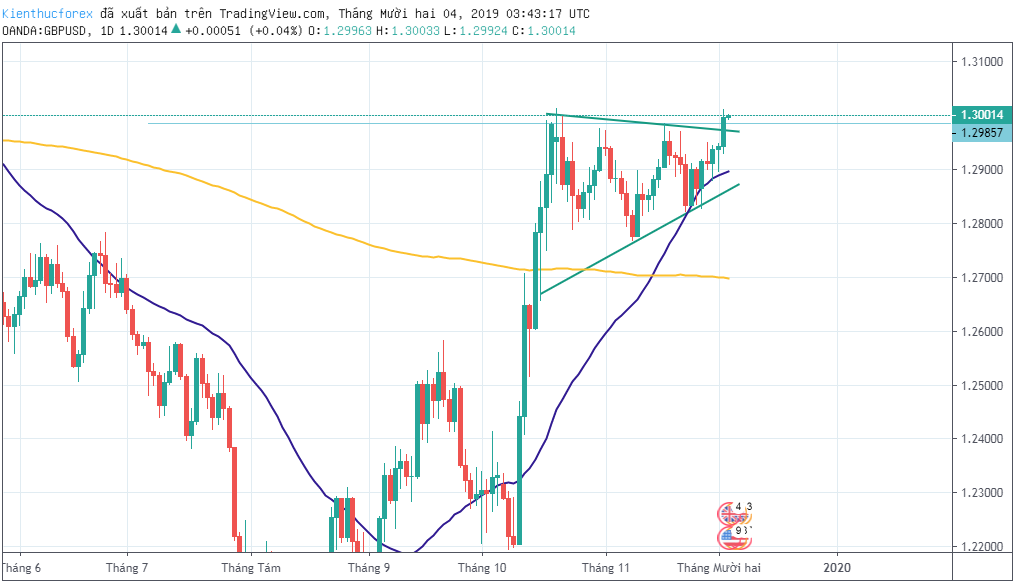 Thus, yesterday the D1 Candlestick closed above 1,298, which suggests that this will become a strong resistance in the future. However, as the candles from H4 and below have shown signs of divergence, it is likely that prices will move around this area until Friday when the Nonfarm news is published, or wait until December 12 to take place. vote in the UK as we said before. Therefore, GBPUSD transactions are very sensitive at this time. You need to manage capital well before entering the order. 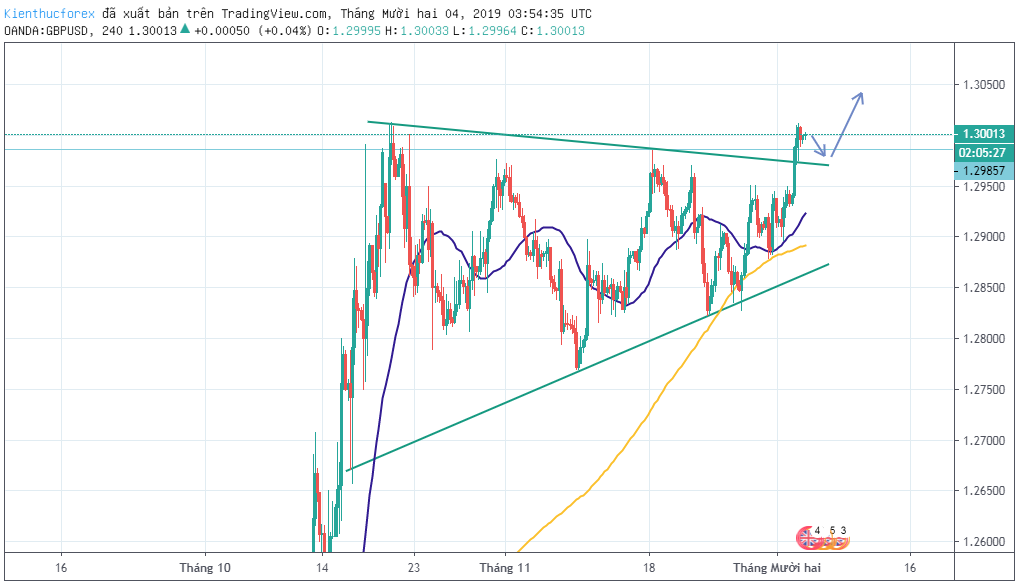 The reason for such price reduction is that FED's Federal Reserve's decision to cut interest rates combined with the intense trade war between the US and China has not come to an end.

But by the end of November, following a wave of protests in Hong Kong, the price of gold had risen sharply on the news that US President Donald Trump would sign a bill to show support for protesters in Hong Kong. . With China insisting on “a two-state system, one country”, the move to sign a bill from Mr. Trump could be seen as an unnecessary provocation. However, it was thanks to these developments that made gold have a strong recovery phase in late November.

Apart from the above points, we can see that the trade war agreement between the US and China is one of the reasons that pushed the G10 central banks into a race to cut interest rates. When the trade war between the two countries became more intense, causing instability for global trade, central banks could hardly raise interest rates. Therefore, gold will be considered a safe haven to avoid storms when the economic downturn takes place.

Another point that shows that rising inflation is that falling global bond yields are also a sign for gold to recover. 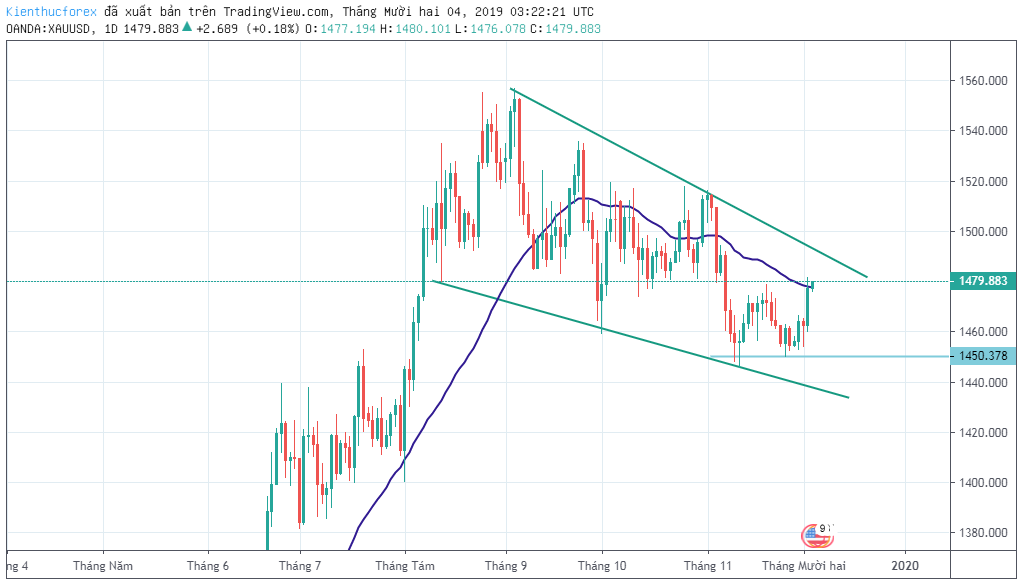 If you look at the D1 frame, you can see that gold is trading around the above model, and of course the price is gradually shrinking in preparation for a new trend.

In the H4 frame, it can be seen that the price has repeatedly tested the support area of ​​1450, but could not break through here, and has created a higher bottom: 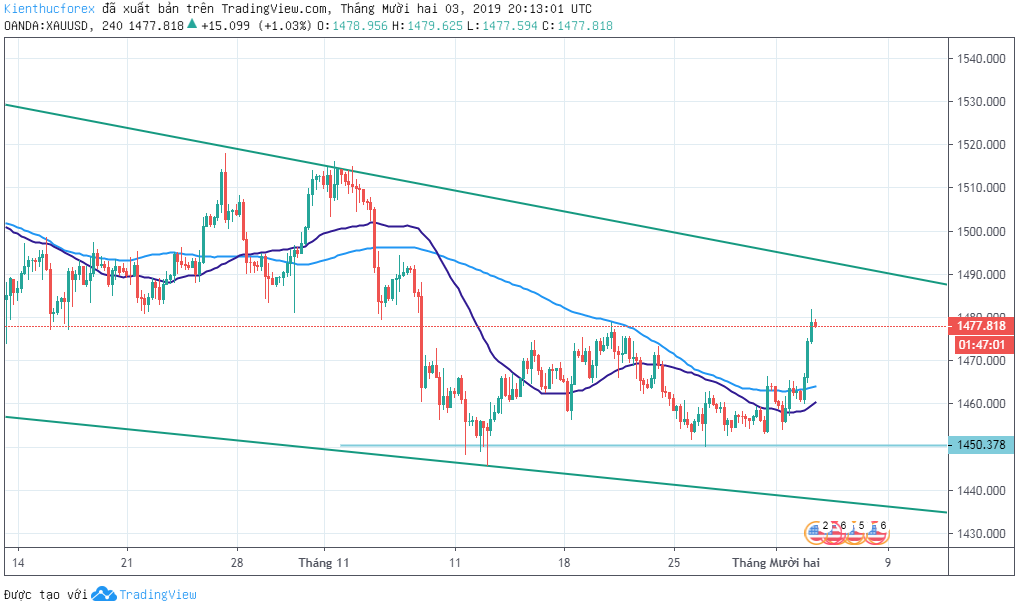 At this point, 1450 has become a support and today, the price has jumped spectacularly and surpassed the resistance of 1477.

Yesterday, the gold closed the D1 candle on 1477 which is also above the 34 EMA. It is likely that this resistance will turn into support, so we can expect the price to touch the upper edge of 149x.

Gold trading is recommended as follows: 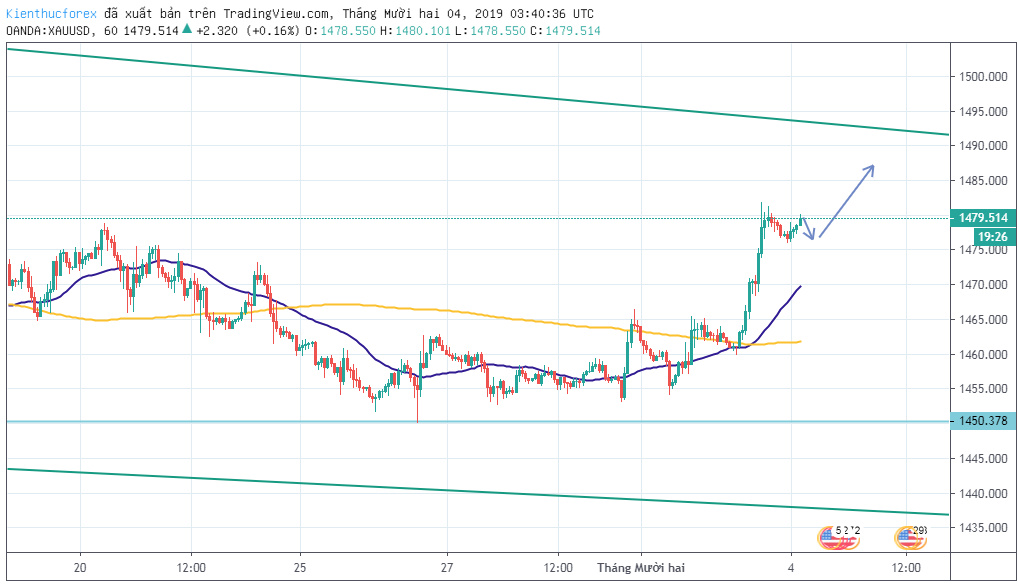 Looking at the D1 chart, you can see that AUDCAD has formed a rising wedge: 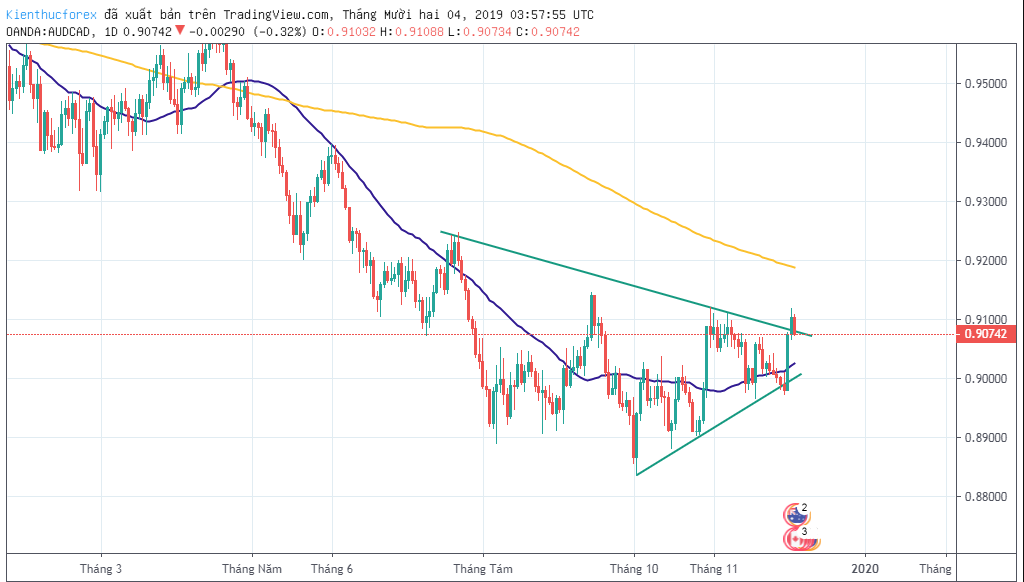 Although yesterday D1 closed at the upper edge of the rising wedge, however, during today's Asian session AUDCAD plummeted. In addition, the H4 candles have not been able to create higher peaks, so this is probably just a false break.

Currently, the price will retest the resistance level at 0.906. If it stays here, it is likely that prices will break out and increase in accordance with the wedge model. So you can:

The remarkable news of the week 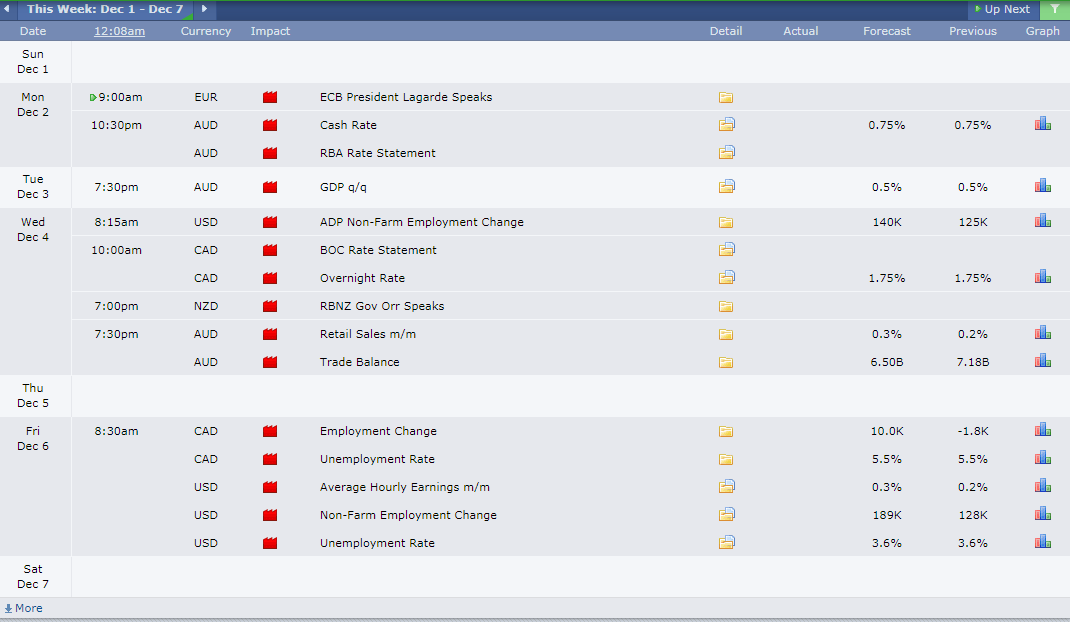 You note some news this week mainly related to the non-farm payroll report at 6:30 pm on Friday (winter time). Especially on Friday, there is not only the Nonfarm newsletter but also news related to Canadian employment changes. So in addition to the US dollar, the Canadian dollar, especially the USDCAD pair will also have significant changes on Friday. If you do not have experience, it is best to place a full stop loss or “dodge” the currency pairs. Currency related to the 2 above you guys. I wish you successful trading!

You have just read the article: “GOLD, GBPUSD and AUDCAD analysis for the week from December 2 to December 6, 2019”