Popular crypto channel host Coin Bureau is giving a reason why the Cardano (ADA) price could recover and hit a new all-time high in the coming months.

ADA rallied to an all-time high of $3.1 in early September, but since then it has suffered a severe price correction of more than 60%.

The seventh-ranked crypto asset by market capitalization is currently trading at $1.21. 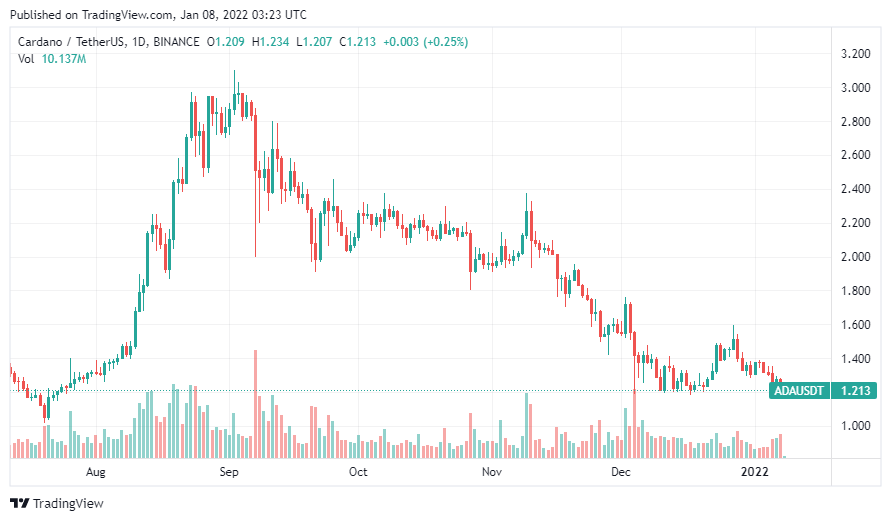 In one video Coin Bureau analyst Guy says there are several reasons to be optimistic about Cardano.

“The good news is that there are a lot of institutional funds exposed to ADA, such as Grayscale’s Digital Large Cap Fund, and it appears that some of these funds have accumulated ADA over the past few months.

More Cardano DApps are also scheduled to roll out in the coming months and these are likely to create the demand that ADA needed to conquer the former ATH.

Last but not least, ADA’s long-term technical indicators suggest it could rally as high as $4 in the coming months, assuming a break of the resistance area at $1.70 is possible. .”

Guy noted if ADA fails to break above $1.70, it could form a head and shoulders pattern, a price structure used to identify trend reversals. According to the analyst, such a reversal could take ADA back to 2020 lows below $0.30.

“I highly doubt this scenario because Cardano has so many major milestones coming up that could easily take ADA to a new all-time high.”